Update Required To play the media you will need to either update your browser to a recent version or update your Flash plugin.
By Hai Do
09 April 2020


The new coronavirus has killed nearly 18,000 people in Italy and nearly 90,000 people worldwide. The World Health Organization says most of those who are dying of the COVID-19 disease are over the age of 60.

But, try telling that to Ada Zanusso of Italy. She is 103 years old. She lived through the pandemic of 1918 that killed 50 million people worldwide. Now, she has survived COVID-19. 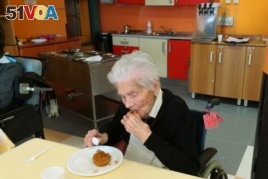 "I'm well, I'm well," Zanusso told reporters with the Associated Press. She spoke with the reporters over video from a home for older people in the northern Italian town of Lessona. "I watch TV, read the newspapers," she added.

When asked about her fight against COVID-19, Zanusso simply said, "I had some fever."

COVID-19 can cause minor or moderate sickness. Most of those who are infected recover. But those with existing health problem and older people like Zanusso are at a higher risk for more serious illness or even death.

"One day she opened her eyes again and resumed doing what she used to before," the doctor added.

What helped her get through the illness? "Courage and strength, faith," Zanusso said.

Zanusso grew up in Treviso, Italy. She worked there for many years in the cloth-making industry. She had four children — three of whom are living. She has four grandchildren and three great-grandchildren. She will turn 104 on August 16.

Under Italy's lockdown order to prevent the spread of the coronavirus, visitors are not permitted to enter nursing homes, where many older people live.

Zanusso's doctor asked her what she would like to do when "they open the doors" again.

"I'd like to take a lovely walk," she answered. She added that she looks forward to watching her three great-grandchildren play together again.

Hai Do adapted this story from the Associated Press news report. Ashley Thompson was the editor.

hydrate - v. supply someone with water

courage - n. the ability to do something that is difficult or dangerous

faith - n. strong religious belief or strong belief in someone or something

lockdown - n. a security measure in an emergency to prevent people from entering or leaving a place