Update Required To play the media you will need to either update your browser to a recent version or update your Flash plugin.
By Jim Dresbach
22 June, 2016


A majority of people in Yemen are facing severe food insecurity, according to the United Nations and its partners.

Eleven international agencies and the U.N. Food and Agriculture Organization use a system called the Integrated Food Security Phase Classification, or IPC to measure food security. They say the IPC provides a simple and effective way for food security experts to communicate their findings to decision-makers and the media.

The latest IPC study found that 19 of 22 governorates in Yemen face severe food insecurity. It also found that over half of the country's population faces "emergency" levels. An emergency is the fourth level on a five-level system for rating food insecurity.

"The IPC results clearly show the huge magnitude of the humanitarian crisis in Yemen," said Jamie McGoldrick, U.N. humanitarian coordinator for Yemen. "This is one of the worst crises in the world and is continuing to get worse," he said.

Fuel shortages and import restrictions have led to the food shortages in Yemen. The country imports nearly 90 percent of its food. In March, fuel imports met only 12 percent of the country's food needs.

Representative and Country Director of the World Food Program Purnima Kashyap predicted an increase in the number of hungry people in Yemen. "We appeal to all parties to ensure unrestricted access for the delivery of humanitarian assistance to affected people."

Fighting within the country has also not helped the food situation. The Yemeni government and Houthi rebels have been fighting for many years. 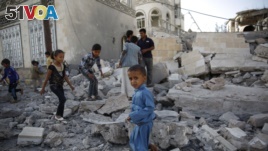 Children play amid the rubble of a house destroyed by a Saudi-led airstrike in Sana'a, Yemen, Sept. 8, 2015. A cease-fire declared two months ago has not slowed the violence the Yemen, local activists say.

Saudi Arabia and its allies began air strikes against the rebels in March 2015. At least 3,500 civilians have been killed since the strikes began. More than 2.5 million Yemenis have been displaced within the country since 2010, according to the United Nations.

The Houthis control much of the nation, including the capital, Sana'a. They have the support of former Yemeni president Ali Abdullah Saleh and Iran.

magnitude – n. the size, extent or importance of something

insecurity – adj. not certain to continue or be successful for a long time