Update Required To play the media you will need to either update your browser to a recent version or update your Flash plugin.
By Susan Shand
07 December 2020


Four months ago, 10-year-old Hassan Merzam Muhammad of Yemen was so malnourished he was unable to walk. His father had to carry him into a medical center.

A photographer with Reuters news agency captured Hassan's image. The photograph was named one of Reuters' pictures of the year.

Now, after medical treatment, Hassan is able to play with toys and uses hand signals and a smile to communicate. He has been unable to speak since birth.

But malnutrition continues to threaten him and 2 million other Yemeni children. War, economic collapse and the coronavirus crisis have all pushed the country toward its worst famine in years.

"Hassan eats what we eat: rice, bread. We don't have fat-rich foods nowadays, we cannot find meat for him," his uncle Tayeb Muhammed told Reuters.

Hassan has lost some of the weight he gained during treatment since returning to his family's small shelter. His family has been forced to find new shelter five times because of the ongoing war. The family now lives in Hajjah, a very poor area of the country. There is no work for Hassan's father.

When Reuters reporters first met Hassan in July, he weighed just nine kilograms. A struggling local doctors' group sent him to the capital city, Sanaa, for treatment. A charity paid for his treatment. 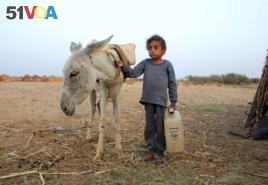 "His body is weak again," his uncle told Reuters.

Doctor Ali Yahya Hajer works at Hassan's local medical center. He said the family needs containers of food delivered to their home until the child's health and the family's situation improve.

Famine has never been officially declared in Yemen. Yet, the five-year-long war has left 80 percent of the population in need of food aid. The United Nations calls the situation in Yemen the world's largest humanitarian crisis.

Predictions for next year are worse, the IPC says. Between January and June of 2021, 54 percent of Yemenis are likely to experience high levels of extreme hunger.

"These alarming numbers must be a wake-up call to the world," said David Beasley. He is executive director of the U.N's World Food Programme (WFP).

The U.N. warned of a coming famine in Yemen in late 2018. The warning started the international aid process. But aid efforts have slowed in 2020 because of coronavirus restrictions, reduced remittances, locusts, floods and lack of money. As a result, food insecurity has worsened.

Conflict, however, remains the main driver of food insecurity.

A Saudi-led coalition has been battling the Iranian-backed Houthi movement since 2015. The war has killed more than 100,000 people and has sharply divided the country.

The Reuters News Agency reported on this story. Susan Shand adapted it for Learning English. Ashley Thompson was the editor.

remittance – n. an amount of money that is sent as a payment for something

locust – n. a type of grasshopper that travels in very large groups and that can cause great destruction by eating crops

charity – n. the act of giving money, food, or other kinds of help to people who are poor, sick