Yes, Virginia, Every Vote Does Count

Update Required To play the media you will need to either update your browser to a recent version or update your Flash plugin.
By Hai Do
20 December, 2017

There is a saying in America that "every vote counts." On Tuesday, in the U.S. state of Virginia, the saying appeared to come true.

There were 23,215 votes cast in the city of Newport News on Election Day last month. Voters were choosing between David Yancey and Shelly Simonds as their representative to the Virginia House of Delegates.

Yancey held a small lead of 10 votes going into the recount on Tuesday. After five hours of re-examining ballots, election officials announced the results: 11,608 votes for Simonds and 11,607 votes for Yancey. 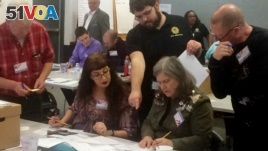 By just one vote, Shelly Simonds, a Democrat, appeared to defeat a three-term Republican incumbent David Yancey. Simonds' victory would mean Republicans and Democrats now have equal power in the Virginia House of Delegates. The Republican Party has controlled the house for the last 17 years.

"We're now 50-50," Virginia's Governor Terry McAuliffe told The Associated Press. "And we won it by one vote. Don't tell me that every vote doesn't count."

Virginia law requires the recount to be approved by a panel of judges. On Wednesday, the panel found that one questionable ballot should be counted for Republican David Yancey. That would mean both Yancey and Simonds had 11,608 votes each.

"The court declares there is no winner in this election," Judge Bryant Sugg said.

In the case of a tie in a House race, Virginia law says the winner will be chosen by what is known as a coin toss.

Hai Do wrote this story for Learning English based on AP news reports. Caty Weaver was the editor.

panel - n. group of people with skill, knowledge and experience to make decision

coin toss - n. a practice of throwing a coin in the air while calling "heads" or "tails" to decide on a winner or a decision