You Really Should Learn Modals!

Update Required To play the media you will need to either update your browser to a recent version or update your Flash plugin.
By Adam Brock
02 June, 2016

This week we are going to show you how to give advice using modal verbs. Modal verbs (called modals for short) are auxiliary verbs that express a speaker's attitude and the strength of that attitude.

For example, "He should visit Prague."

In this sentence, should is the modal verb, and visit is the main verb.

There are about 17 modals in English — grammar experts do not agree on an exact number. Today we will focus on three common modals used for giving advice: should, ought to, and had better.

Let's start with should. Should has multiple meanings. It can be used to express certainty, such as, "He should be here by 5 o'clock." Should can be a substitute for the conditional word if. You might hear someone say, "Should you need help, just ask me."

But more often, we use should to give suggestions and friendly advice, such as, "You should apply for that job," or "You should try that new restaurant."

Use should have to express regret, or a negative feeling about the past. Imagine you trusted someone and that person later cheated on you. You could say, "I should have known better than to trust him." The Beatles used the expression in a popular song.

I should have known better with a girl like you

That I would love everything that you do

The next modal we will talk about is ought to. Ought to is another modal for giving advice. Sometimes ought to sounds more like "otta" as in this romantic song by Al Green.

Sit back down and talk to me

About how you want to be

You ought to be with me

Yeah you ought to be with me

Ought to is similar in meaning to should, but it is not used as often. In modern American English, ought to is seldom used with the past tense or in the question form.

Let's move on to had better. Had better is stronger than should and ought to. Had better carries an indirect threat.

For example, if you said, "You had better finish the report," you are not making a polite suggestion. You are making an indirect threat.

In other words, if you don't finish the report, you are in trouble. Authority figures sometimes use had better when speaking to people below them. Parents also use this form often.

Listen to cartoon character Malory Archer. Malory is the head of a spy agency. People think she is arrogant and heartless. Listen to her tone when she uses had better.

And Missy, you had better watch it!

As you can hear, Malory is not making a polite suggestion. She is threatening someone in a lower position.

Had better is not always impolite, it could express a sense of urgency as in, "Your plane is leaving! You had better run!" In other words, "If you don't run, you will miss your flight." Had better has no past tense or question form. 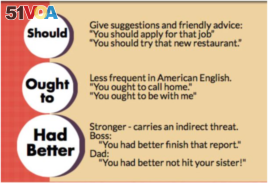 Should, ought to, and had better can be difficult for English learners to hear. Native speakers often shorten these words in casual conversation. In rapid speech, modals seem to disappear because they are shortened and often fall on unstressed syllables.

We will read some examples for you. The first sentence will be in slow, careful speech. Then we will read it again in rapid, informal speech.

I should have been listening to what she had to say.

I shoulda been listenin' ta what she had t' say.

You ought to be ashamed of yourself.

You otta be ashamed of yourself.

You had better decide what you want to do.

That's all the advice we have for you today. There is much more to learn about modals. We will cover them in more detail in future episodes. Until then, you should practice modals with British punk band, The Clash.

Darling you've got to let me know

Should I stay or should I go?

If you say that you are mine

I'll be here till the end of time

So you've got to let me know

Should I stay or should I go?

Now it's your turn. Think of a friend whom you would like to give advice. Write to us in the Comments section. Write two sentences - using should, ought to, or had better - giving advice. We'll give you feedback.

modal verb - a verb (such as can, could, shall, should, ought to, will, or would) that is usually used with another verb to express ideas such as possibility, necessity, and permission

auxiliary verb - a verb (such as have, be, may, do, shall, will, can, or must) that is used with another verb to show the verb's tense, to form a question, etc.

certainty – n. the state of being or feeling about how likely it is that something will happen

arrogant – adj. having or showing the insulting attitude of people who believe that they are better, smarter, or more important than other people

unstressed – adj. not having an accent