Update Required To play the media you will need to either update your browser to a recent version or update your Flash plugin.
By Bryan Lynn
28 September 2021

The criticism came during the opening of an international gathering of about 400 youth climate activists that opened Tuesday in Milan, Italy. The purpose of the three-day Youth4Climate meeting is to decide on suggestions to send to a major United Nations climate summit set to begin October 31 in Glasgow, Scotland.

Well-known Swedish climate campaigner Greta Thunberg spoke to the group. She said leaders have promised over the years to fight climate change. But she added that very little action has taken place since the first United Nations Earth Summit was held in 1992. "Thirty years of blah, blah, blah," the 18-year-old Thunberg said. "And where has this led us?"

She noted that half of all carbon emissions had happened since 1990 and one-third since 2005.

"So-called leaders have cherry-picked young people to meetings like this to pretend they are listening to us, but they are not listening," Thunberg added. 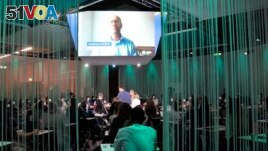 People follow a debate on the opening day of a three-day Youth for Climate summit in Milan, Italy, Tuesday, Sept. 28, 2021. (AP Photo/Luca Bruno)

She said emissions of carbon dioxide gas (CO2) emissions are still rising, and noted that "science doesn't lie." "Leaders like to say, ‘We can do it.' They obviously don't mean it. But we do," she told the gathering.

Another activist to speak was 24-year-old Vanessa Nakate from Uganda. She said that promises of $117 billion a year to help nations especially vulnerable to the effects of climate change had not come through. She said the money is urgently needed as recent wildfires and floods in the United States and Europe showed that "loss and damage is now possible everywhere."

Nakate spoke about how climate change was affecting her own continent. Just last week, she said she saw police taking away a body that had been washed away by violent storms in Uganda's capital, Kampala. Her mother told her that one man caught in the water had been trying to save the goods he was selling from being washed away.

Thunberg created the worldwide protest movement Fridays for Future. She noted in her comments that it was not too late to turn around the harmful effects of climate change. She called for "constructive" negotiations to move policies forward.

Later this week in Milan, about 50 of the world's climate ministers will meet to discuss issues to be considered at the U.N.'s Climate Change Conference in Glasgow. The Milan meeting will aim to find common ground on disagreements among countries. Among the issues to be discussed include how quickly climate change policies should be put in place and how they will be paid for.

Hopes for a successful Glasgow summit have been raised by announcements from the world's two biggest economies and largest carbon polluters, the United States and China. Chinese President Xi Jinping said his country would no longer fund coal-fired plants abroad. And U.S. President Joe Biden announced a plan to double financial aid for green industry growth to poorer nations.

summit – n. an important meeting between the leaders of two or more governments

cherry-pick – v. to pick only the best people or things from a group

pretend – v. to behave as if something is true when it is not