Organization Urges Young African Scientists to Become ‘the Next Einstein’

Update Required To play the media you will need to either update your browser to a recent version or update your Flash plugin.
By Pete Musto
15 April, 2018


Researchers from all over Africa presented their work at the recent Next Einstein Forum conference in Rwanda.

Conference organizers set up the event to provide support for the development of young scientists across Africa. Organizers called it the largest-ever gathering of scientists on the continent.

South African genetics expert Vinet Coetzee spoke at the meeting. She talked about a device to help doctors identify persons with malaria. This could be extremely useful in rural areas since the device does not need blood or even laboratory tests.

Coetzee said the device can provide test results quickly, is not costly and does not require a medical treatment.

"It can reduce health inequality and bring us one step closer to a world free of malaria," she added.

Peter Ngene, a chemistry professor from Nigeria, spoke about nanotechnology: the science of making unimaginably small things. Ngene described how he plans to use extremely small devices to store energy from the sun. He said, "We can go from a dark continent to a bright continent."

Rwandan President Paul Kagame is the current head of the African Union. He opened the conference by linking scientific progress to Africa's development at large.

Kagame said, "Today, more than ever before...math and science proficiency is a prerequisite for...high-income status and the gains in health and well-being that go along with it."

"For too long, Africa has allowed itself to be left behind," the president added. He noted that as the continent aims to compete on the same level as other area of the world, it cannot leave out women and girls. Kagame urged Africans not to accept the international custom of men outnumbering women in scientific positions and research.

Eliane Ubalijoro is a professor at McGill University in Montreal, Canada. She noted the large number of women at the conference.

Africa falls behind the rest of the world in scientific production. But research on the continent is growing quickly. And a United Nations report showed that some African nations have increased their research and development spending "to the level of a middle-income economy." Three examples are Ethiopia, Kenya and Mali.

The Next Einstein Forum was launched in 2013. The forum now supports 19 African science fellows, along with an Africa Science Week at schools in 30 countries. At the meeting last month, the group launched Scientific African, a magazine to publicize new research. It is to be published four times a year.

The forum is a product of the African Institute for Mathematical Sciences. The institute provides financial aid for students to earn masters' degrees in mathematics at centers in Cameroon, Ghana, Rwanda, Senegal, South Africa and Tanzania. More than 1,500 students from 43 African countries have completed their studies through the program since 2003. And 32 percent of them are women. 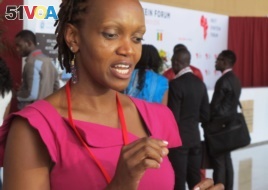 The program supporting Africans who study mathematics was the idea of South African-born physicist Neil Turok. He grew up as his parents fought apartheid, the country's former system of racial separation.

Turok told the conference, "My parents took pride in combatting injustice and they were thrown in jail. It was difficult for me personally, but it was good for my studies because I threw myself into my work."

Turok gained success in physics and mathematics. He worked with Stephen Hawking, taught at Princeton University in the United States and become the director of the Perimeter Institute in Canada. The institute is an independent research center for experimental physics.

His father then urged him to do something for Africa. So he set up the African Institute for Mathematical Sciences in 2003. Ten years later, the Next Einstein Forum was launched.

Turok said he believes the world's next Albert Einstein can come from Africa.

"When Africans enter science in large numbers, with their diversity...and motivation, they will make massive...discoveries," he suggested. "Those discoveries are just waiting there to be made."

Andrew Meldrum reported this story for the Associated Press. Pete Musto adapted his report for VOA Learning English. George Grow was the editor.

We want to hear from you. What discoveries do you think these young African researchers will make? What kinds of similar programs are there in your country? Write to us in the Comments Section or on 51VOA.COM.

proficiency – n. the quality of being good at doing something

status – n. the position or rank of someone or something when compared to others in a society, organization, or group

allow(ed) – v. to permit something

masters' degree(s) – n. a degree that is given to a student by a college or university usually after one or two years of additional study following a bachelor's degree

pride – n. a feeling that you respect yourself and deserve to be respected by other people

combat(ting) – v. to try to stop something from happening or getting worse

diversity – n. the quality or state of having many different forms, types, ideas

motivation – n. the act or process of giving someone a reason for doing something