Update Required To play the media you will need to either update your browser to a recent version or update your Flash plugin.
By Jill Robbins
17 November 2021


Gue Gue used to be a travel guide in Mandalay, Myanmar, an ancient royal city that has moved quickly into the 21st century. Today, it has shiny new shopping centers, well-dressed students and popular eateries.

Gue had never thought of herself as politically active. But that changed earlier this year. Myanmar's military seized power in a coup on February 1, overthrowing the civilian government. In the months that followed, hundreds of protesters were killed by troops on the streets.

Now, Gue is in a hidden rebel training camp.

The members of the resistance say they will fight the "final battle" against military rule.

Today's generation of young people have grown up in a world of smartphones and greater political freedom, unlike their parents. They say they are ready to pay any price in order to overthrow a government that threatens to take them back to a dark past.

On an April evening, Gue Gue secretly left her family home. A few weeks later, she was in a rebel training camp in the jungle. There, she had a medical emergency – her appendix was infected and had to be removed. The operation was carried out in a poorly equipped medical center without any medicine to take away the pain. She had to stay awake during the operation. 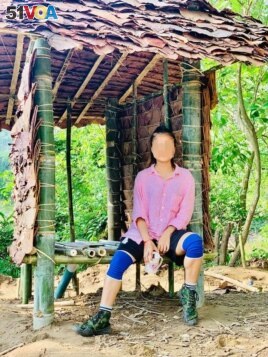 "I never dreamed that I would be sleeping in a roofless shelter or using a makeshift toilet," said Gue Gue, shown at the toilet she helped build. Source: courtesy of Gue Gue

Since the coup, Gue Gue had seen many of her generation killed by troops on the streets of her hometown as they called for democracy. There was hope that the international community would take action against the military's increasing violence. When no action was taken, thousands like Gue Gue decided the only choice was force.

Two faces of the resistance

The army has been the most powerful institution in the country since it became an independent nation in 1948. The military has stood against popular uprisings and civil war for many years. That includes the 1988 uprising that led to the appearance of Aung San Suu Kyi as a human rights leader.

The men and women rebelling against Myanmar's military say they will be the last generation to live under the control of the country's military. In the months since the February coup, university teachers, day laborers, technology workers, students, artists and others have become guerrilla fighters.

The International Crisis Group reported in October that hundreds of armed groups have begun operating across the country. Many groups call themselves People's Defense Forces, or PDFs. Famous people and actors, wanted by the officials for supporting the protests, have appeared on social media holding guns.

Tayzar San is a 32-year-old librarian. He and others like him have been hiding in cities, organizing secret demonstrations, sending money to striking workers and planning. He lives out of a backpack, moving from place to place. The government has offered a $5,600 reward for his capture. He has not seen his wife and daughter in many months.

The junta has promised to hold elections within two years. Speaking in October, army chief and coup leader Min Aung Hlaing said the junta was working on a plan to reach a "true union based on democracy and federalism." He said the leadership was working to "change the country peacefully."

The country of 55 million people once seemed to be on its way to becoming Asia's newest semi-democratic nation. In the 70 years since it won independence from colonial Britain, it has had less than 25 years of civilian governance.

Aung San Suu Kyi was imprisoned in her home for 15 years. She was freed to take part in elections and, in 2015, won. In the following years, Suu Kyi drew criticism for standing by the military as they carried out what the United Nations called a genocidal campaign against the Rohingya Muslim minority.

But Suu Kyi's government made some steps toward weakening military power and gaining foreign investment. The Myanmar kyat became Asia's best-performing money. The World Bank was predicting economic growth in the country even with the COVID-19 health crisis.

That all came to an end in the early hours of February 1. Suu Kyi and her leadership were arrested. The junta declared a direct return to military rule.

The rights group Assistance Association for Political Prisoners, or AAPP. says more than 1,200 people have since been killed in attacks by junta troops.

Hundreds have also been killed by the resistance, according to the junta and local media reports. They say newly formed guerrilla groups have killed suspected informers and troops.

The fighting spread across the country.

Longtime activist Bo Kyi is a co-founder of the AAPP. He believes the junta can now be defeated. He said the young rebels have creative ideas and good political understanding. They are trying to unite the country's many ethnic groups. Smartphones and the internet have made it harder for the military to hide its actions. On social media, reports of acts of violence spread widely in minutes.

Three days after the coup, Tayzar San and some friends gathered outside the medical university in Mandalay. They held signs that read "Protect democracy," "People's protest against military rule" and "Respect the people's votes." They left quickly, but minutes later police arrested four of the young men.

Their actions helped set off a wave of protests around the country.

Tayzar San left his family to keep them safe. He began to organize daily protests. On Facebook, he called on people to take to the streets: "Don't look for a leader, don't wait... All the people in the community, please come out."

At home, his daughter has turned two years old and only sees him on television.

In April, after the long bus ride from Mandalay, Gue Gue and her friends were led by their contacts to an old school in a village close to the jungle. One of them said Gue Gue was the first woman to go for the training there.

"They told me that they don't accept women, because they haven't prepared anything," Gue Gue said. "‘It will be so tiring,' they said. I told them: ‘I don't care whether it is tiring. I must join.'"

From there, they traveled to the training camp, and several more women arrived. Together, they built up the camp.

Over the phone, Gue Gue said she now understands she had never done anything truly difficult in her life before. She said she "never dreamed" she would be living in the conditions she was in.

After weeks of silence, Gue Gue sent a short message to Reuters reporters in early September. Her group had to move its camp because the military was coming their way.

"I don't want the people to forget about the young people who are sacrificing their lives on the ground," Gue Gue said by phone. "We're still here."

Poppy McPherson and Shoon Naing reported on this story for Reuters news service. Jill Robbins adapted it for Learning English. Ashley Thompson was the editor.

uprising – n. a usually violent effort by many people to change the government or leader of a country

librarian – n. a person who works in a library (a place where many books are kept and may be borrowed)

backpack – n. a bag for carrying things that has two shoulder straps and is carried on the back

junta – n. a military group controlling a government after taking control of it by force

according to – prep. as stated, reported, or recorded by (someone or something)

What do you think of the young Burmese who are fighting the military government? We want to hear from you. Write to us in the Comments Section.