Update Required To play the media you will need to either update your browser to a recent version or update your Flash plugin.
By Hai Do
14 August 2022


Eight-year-old Kevin Kindelan and 7-year-old Leoni Venego play baseball for a Central Havana junior league team in Cuba. They both have big dreams.

Venego says he is aiming higher. "I want to get to the Major Leagues and be like Yuli Gurriel," he said. 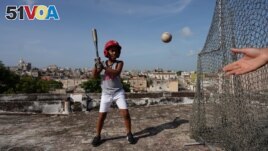 Baseball fan Kevin Kindelan, 8, practices with his father on the roof of their house in Havana, Cuba, June 14, 2022. (REUTERS/Alexandre Meneghini )

Gurriel, who was born in Cuba, plays the first base position for the Houston Astros. The team is part of Major League Baseball in the United States.

Baseball is a national pastime in Cuba, just as it is in the United States. It is a sport that many Cubans enjoy and follow.

But Cuba's worsening economic situation has led to more baseball players leaving the country -- and the national league.

Cuba's economy shrank 11 percent in 2020. Cubans must wait in long lines for food, medicine and fuel. Since October, the U.S. Customs and Border Protection agency said more than 157,000 Cubans have fled to the U.S.

Francis Romero is a Cuban baseball expert and writer who lives in Florida. He said, in the past six years, the number of baseball players who have left Cuba for the U.S. is three times higher than the number of players who left between 2000 and 2010.

Romero told Reuters that young Cuban baseball players no longer want to prove themselves by winning Olympic medals for the country. The Cuban national teams won gold medals in baseball in Barcelona in 1992, Atlanta in 1996 and Athens in 2004.

"Players once waited a long time to emigrate, to prove themselves," Romero said. "Now they leave at 16 or 17 years of age."

At the "Ponton" ballfield in central Havana, some of Cuba's youngest players are practicing on the muddy infield.

Their coach is Irakly Chirino, a former player in Cuba's national league who began his career at Ponton. "Here, we don't have gloves, bats, shoes, or even balls to play with...and when we do, they are too expensive," Chirino said.

A lack of supplies has led some baseball players to leave the country or play soccer instead. Soccer is another favorite sport that does not require much equipment.

"Let's not fool ourselves...we're losing our best ballplayers before they even make it to the national series," Chirino said.

Coach Nicolas Reyes is 73 years old. More than 10 of his players have left Cuba. "They started with me and now they're in the [U.S.] Major Leagues. It makes me proud," he said.

But he recognizes that money and fame have increasingly pulled players away from Cuba. "When I played, it wasn't like that. You would never betray your country," he added.

Juan Reinaldo Perez is president of the Cuban Baseball Federation. He said because of the growing number of promising baseball players, there is still hope for the future of Cuban baseball. "We are a country with a baseball tradition and that continues to grow," he said.

Cuba is now centering its efforts on keeping promising ballplayers from leaving.

In May, the Cuban federation signed a deal with the World Baseball Softball Confederation (WBSC) that permits Cuban players to play professionally in other countries while keeping their nationality.

A similar deal, signed with the Major League Baseball (MLB) in the United States in 2018, would have given Cubans the same right. But the U.S. president at the time, Donald Trump, ended the deal before it became official.

That lack of such a deal with MLB continues to be a major barrier to keeping promising Cuban ballplayers at home, says Guillermo Carmona. He is the manager of Cuba's well-known Industriales team.

"Without a doubt, [that deal] was a great motivation [for our players]," said Carmona. "Now, many have left us."

Nelson Acosta reported this story for Reuters. Hai Do adapted the story for Learning English.

pastime - n. an activity that you enjoy doing during your free time

emigrate - v. to leave a country to live somewhere else

practice - v. to do something again and again in order to get better

coach - n. a person who trains and teaches athletes

manager - n. someone who directs or who is in charge