Update Required To play the media you will need to either update your browser to a recent version or update your Flash plugin.
By Anne Ball
17 March 2020


Wasima Khan stopped attending school six years ago. She has yet to complete her studies.

The 19-year-old is not an exception. She is like many other young women in Nuh, where she lives, in northern India. Only about 30 percent of the women there can read and write. That is about half the national average.

Wasima Khan left school because she had to do housework and help her mother with younger brothers and sisters, she said. And there was no middle school in her community.

At the same time, boys living in Papika, in Haryana state, walk to the nearest high school, about four kilometers away. Yet girls are not permitted to leave the small village.

In Papika, many of the women work in fields or care for farm animals. Young girls get water, while children play. Men often sit outside their homes in the sun after a cold winter. 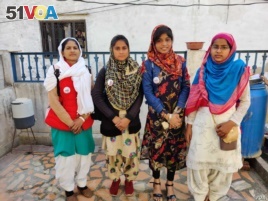 These girls made it to college from their small village in India are now talking about the importance of educating girls. From left to right: Shahnaz Bano, Arastoon, Anjul Islam and Rizwana

A group of young women from this mostly Muslim community made it to college by overcoming prejudices against women. Now they are working to get more girls into school. Every Sunday they spread out in Papika and other villages to talk to people about why they should let their daughters study.

The young women persuaded Wasima Khan's mother to keep her younger daughter at school. They ease her concerns about dowries — the money or goods that a woman's family must give to her husband's family when they marry. She fears that educated girls will want to marry educated men who will demand a bigger dowry. This is a difficult for many poor families who see no reason to educate girls.

Arastoon is a postgraduate student studying history. She says her college education has given her the strength to fight the dowry tradition. "I will only marry into a family which does not demand dowry," she said, "however well-to-do they may be."

The young women tell Wasima Khan that she can return to school. As a girl, her goal had been to join India's police force. She does not know if she can go back, but she says she will do whatever she can to make sure her sister does not leave school.

A non-profit organization called the Selfie with Daughter Foundation is leading the campaign to empower and education women in these villages. Its aim is to bring change by publicizing the success stories of girls who came from the villages and now serve as role models for other families.

Rizwana Khan began her campaign by persuading her extended family to educate their daughters. She tells these women that educated girls could help the villages. In some areas, women are not permitted to interact with male lawyers, be taught by male teachers or get treated by male doctors.

Khan is training for a job in health care as a nurse. When she was a teenager, she became terribly sick, but her treatment was a problem. Her parents could not read and medical centers in the area were very poor quality. It made her decide to get her own education.

Khan said she wants to bring medical aid to women in the area. This is a goal her father urged her to go for — even selling belongings to pay for her nursing school.

"They don't want to educate their daughters, but if women are ill, they want a lady doctor. How will that happen?" Khan said.

Another girl in the campaign, Shahnaz Bano, wants to teach in a local school. She said, "I tell them that if your daughters don't attend schools, how will they find female teachers?"

It is a message the young women repeat as they go from house to house. They point out how they had to fight with their families to get the right to study. Sometimes, even when parents agree to let them study, others in the village raised objections.

Most boys who complete college move away to look for better jobs outside the villages. But the girls hope to use their skills and education in the community.

Anjum Islam is studying law. She wants to provide free legal aid to women. "I don't want to do that for men," she adds.

But her bigger goal is to change minds. "Here men think that women are only meant to do housework and give birth to children," Islam said. "We have to change this thinking. If we have quality under the law, how can society have this gender discrimination?"

The campaign is having success influencing some women. They do most of the work, both at home and in the fields.

Aslima Khan is 30 years old. She is determined to educate her three daughters. She wants to make sure they can escape her life story of hard, backbreaking work. All day long she works with the animals, finds firewood, cleans, cooks and washes dishes, she said.

"If I had studied I would have been saved from this."

Anjana Pasricha wrote this story for VOA. Anne Ball adapted it for Learning English. The editor was George Grow.

What do you think of this story? Do girls go to college in your hometown? Write to us in the comments section below.

prejudice – n. an unfair feeling of dislike for a person or group because of race, sex, religion, etc.

postgraduate – adj. of or relating to studies done after earning a bachelor's degree or other degree

determined – adj. having a strong feeling that you are going to do something and that you will not allow anyone or anything to stop you