Update Required To play the media you will need to either update your browser to a recent version or update your Flash plugin.
By Hai Do
01 August, 2019


When 16-year-old Celestine Wenardy learned that diabetes was a "silent killer" in her home country of Indonesia, she wanted to find an easy way for people to test their blood sugar levels.

People with diabetes usually take a few drops of their own blood to measure the sugar levels. The Indonesian teenager came up with an idea of using heat on a person's skin for the test. 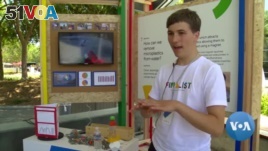 She explains how the test works.

"So this looks like there is no light passing through, but actually if you covered it up, there is light that passes through your skin."

Discussing her work, she told VOA: "I need to make sure it's absolutely accurate, because people's health is in your hands."

After one failure, the 16-year-old then entered her project in the Google Science Fair. She ended up winning the Virgin Galactic Pioneer Award.

Celestine Wenardy is part of 20 teams of students competing this week. The teenagers are from 14 countries. They brought with them new ideas for solving problems in health, the environment and sustainability.

Daniel Kazantsev from Russia is another student at the science fair. He wanted to help people with a physical disability or those recovering from an injury.

His project uses sensors to measure arm and hand movements, such as sign language. The sensors turn the measurements into actual speech. His project won the LEGO Education Award.

Students from Saudi Arabia developed an exoskeleton glove for an injured hand. The device helps teach the hand how to move.

Harvesting the energy from tree movements

Tuan Dolmen from Turkey wanted to harvest energy produced from the movement of tree branches. He said that energy can then be used by farmers to power devices in the field to measure air quality. The project was awarded the Scientific American Innovator Award.

"I'm a bit shocked, actually," he said about the award. "I feel really proud that someone has appreciated my work. It has been a pleasure, and it has been an honor."

The winner of the Google Grand Prize, which comes with $50,000, was Fionn Ferreira from Ireland. He created a new method to remove microplastics from the water using magnets.

The judges commented that Ferreira's project represented the spirit of exploration.

Michelle Quinn reported this story for VOA News. Hai Do adapted her report for VOA Learning English George Grow was the editor.

sustainability – n. the ability to be kept or continue at a set rate or level

appreciate – v. to recognize the worth of someone or something