Update Required To play the media you will need to either update your browser to a recent version or update your Flash plugin.
By VOA
23 July, 2014
51VOA听写整理，转载请注明出处。文本仅供参考，欢迎纠错！

Hannah Godefa is just 16 years old, but she is busy defending the right of all girls and women to be educated. The young woman serves as a national goodwill ambassador to Ethiopia for UNICEF -- the United Nations Children's Fund. And she is urging the UN to make a workable plan to end the discrimination that keeps girls out of classrooms.

Last week, for example, she spoke in Geneva to the committee on elimination of discrimination against women. She talked about increasing girls chances for education and protecting them within education from sexual and other abuses. 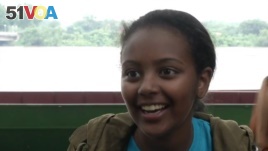 Hannah Godefa was born in Canada to Ethiopian parents. She was appointed to her UNICEF job in January of 2013. Since then, she has visited Ethiopia and other countries in Africa.

She describes the purpose of her work as speaking out for the millions of girls who are not attending school. Hannah notes that some girls do not have a school available to attend. And there are other reasons they can not get an education.

"So, all the odds are stacked against them. That is why we have to target them and support them and protect them," Godefa said.

Hannah became interested in children's education when she was only 7 years old. She was visiting her grandmother in rural Ethiopia at the time. Hannah became friends with a local girl and wanted to keep communicating with her when she returned home.

But Hannah's parents told her that the other girls do not have pencils or paper to write letters. Their daughter reacted by establishing the Pencil Mountain project. She says the project has provided more than 500,000 objects including writing instruments for use in schools.

"So, things beyond pencils, like other basic school supplies as well as text books for second-generation universities, some of the newer universities that have been constructed in Ethiopia, " Godefa said.

The project has also provided wheelchairs for disable students. Nowadays, as a teenager, Hannah does a lot of public speaking. She spoke at the International Day of the Girl Child at UNICEF New York Headquarters in October 2013. She made the presentation a month before her sixteenth birthday.