Update Required To play the media you will need to either update your browser to a recent version or update your Flash plugin.
By VOA
24 September, 2013

From VOA Learning English, welcome to As It Is! I'm Mario Ritter.

Today, we revisit a story about a program that gives young people a chance to do good in their community.

Hurricane Sandy struck the eastern United States last October. The hurricane caused flooding and damage from high winds. Today some victims of Sandy are still having problems. However, there is an army of helpers that have joined the recovery effort. They are young people who are getting a second chance. Jim Tedder has more.

Young people help clear a road damaged by Hurricane Sandy at Breezy Point, New York. When the work is finished, government vehicles will again be able to get to the coast to take care of wildlife.

Other teenagers are preparing food packages for victims of Hurricane Sandy. These helpers are from New York City. They were found guilty of non-violent crimes and are now on probation -- a period of supervision instead of time in jail for former lawbreakers.

Vincent Schiraldi is New York City's Probation Commissioner. He says the young people and the city get something valuable out of the program.

Not far away, Coney Island's Salt and Sea Mission is working with YouthWrap. The group is giving other young offenders the chance to do something good. The Mission takes care of individuals whose homes were destroyed.

The teenagers are paid up to $1400 dollars for the summer. But even more important is the responsibility and experience that these young people gain.

"It meant a lot because it changed the way I see life and now I see people."

Pastor Debby Santiago is the leader of the Salt and Sea Mission. She was once a drug dealer and bank robber. But now the city's Probation Department wants her to provide guidance to the young people.

"They're helping this community, most of them, I mean they're getting pleasure out of helping other people."

Hurricane Sandy recovery projects in New York City involve about 450 teens on probation. And many of them are on their way to a better life. 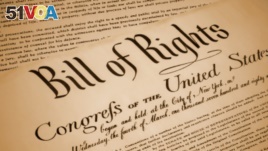 On September 25th, 1789, the United States Congress approved the first 10 amendments to the Constitution. The 10 measures are known as the "Bill of Rights." They established basic freedoms and protections that cannot be taken from the people by the government.
The Bill of Rights was added to the 1787 Constitution after constitutional opponents argued that it gave too much power to the central government.

The ten articles of the Bill of Rights include guarantees of freedom of speech, press and religion. They give the people the right to assemble, or meet, make appeals to the government and possess arms. The Bill of Rights protects Americans against unreasonable searches and seizures.

And that's our show for today. Join us tomorrow for another As It Is program from VOA Learning English.
Related Articles
go top