Update Required To play the media you will need to either update your browser to a recent version or update your Flash plugin.
By George Grow
23 June, 2017


The United Nations reports that deaths and injuries from the conflict in Ukraine have been rising in recent months.

This week, the Office of the U.N. High Commissioner for Human Rights released a report on the situation.

U.N. investigators noted evidence of 193 conflict-related casualties among civilians from the middle of February to the middle of May 2017. The report says the number includes 36 deaths.

"This is a 48 percent increase over the last reporting period," said High Commissioner Zeid Ra'ad al-Hussein. He spoke to the U.N. Human Rights Council Wednesday.

Zeid noted that, "The majority of these casualties resulted from shelling, explosive devices and remnants of war."

U.N. officials estimate that about 10,000 people have been killed and more than 23,500 injured since the fighting started.

Sergiy Kyslytsya, deputy minister for foreign affairs for Ukraine, confirmed the findings of the report. It noted "continuous inflow of foreign fighters and supply of ammunition and heavy weaponry from the Russian Federation into parts of Donetsk and Luhansk regions of Ukraine."

The minister added that while these activities continue, there is "no end to the conflict in sight." 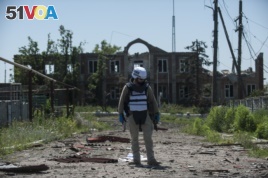 Ukraine, Russia and the Organization for Security and Cooperation in Europe signed an agreement to end the fighting in September 2014. But this deal and other peace efforts have failed to end the violence.

The U.N. reports hospitals and schools in eastern Ukraine have been damaged by repeated shelling. It said shells hit the Donetsk Filtration Station and the South Donbas pumping station first, "endangering safe water supply to more than one million people on both sides of the contact line."

He noted reports of "almost systemic use of torture and ill-treatment by the Security Service of Ukraine." Investigators were told the security service used such methods to force conflict-related detainees into making statements against their will.

The United States and European Union took steps to answer Russia's takeover of the Crimean Peninsula from Ukraine three years ago. The U.S. government and EU ordered sanctions to punish Russian businesses and individuals. 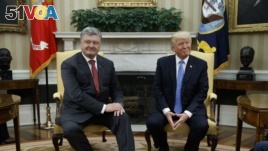 In a meeting with Ukrainian President Petro Poroshenko Tuesday, U.S. President Donald Trump said he has no plans to end the sanctions.

After the report's release, Russia expressed concerns about new cases of arbitrary and illegal detention. It also criticized the use of torture by Ukrainian security forces "to obtain confessions in the Donbass region."

Ukraine's Deputy Foreign Minister said the only way to improve human rights in the area is "through full consolidation of the international community" and pressure on Russia.

Lisa Schlein reported on this story for VOANews. George Grow adapted her report for Learning English. Hai Do was the editor.

casualty – n. someone who is killed or hurt in an accident or conflict

remnant – n. usually a small part of piece of something

sanction – n. an action taken by one country to make another country follow a rule or law

arbitrary – adj. existing or coming about by chance

confession – n. the act of admitting something

consolidation – n. the process of uniting