Update Required To play the media you will need to either update your browser to a recent version or update your Flash plugin.
By Bruce Alpert
24 August, 2016


New research suggests the Zika virus may damage some cells in adult brains.

Until now, scientists mainly worried about Zika's effects on the brains of babies whose mothers were infected with the virus during pregnancy.

The Rockefeller University and La Jolla Institute for Allergy and Immunology carried out the new research. The findings were published last week in the Cell Stem Cell journal. 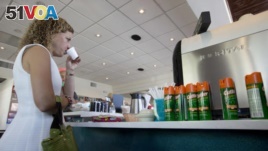 The research suggests the Zika virus could infect some kinds of adult cells. These cells are considered important to learning and memory.

"This is the first study looking at the effect of Zika infection on the adult brain," says Joseph Gleeson. He is a professor at Rockefeller University and head of the Laboratory of Pediatric Brain Disease. Gleeson says, "Based on our findings, getting infected with Zika as an adult may not be as innocuous as people think."

By innocuous, Gleeson means not seeming to have a harmful effect.

In their study, the researchers examined cells in mice.

According to the U.S. Centers for Disease Control and Prevention, or CDC, the Zika virus is spread mostly by a bite from an infected mosquito.

Zika can be passed from a pregnant woman to her fetus, the CDC said. It said infection during pregnancy can cause certain birth defects.

Gleeson, the Rockefeller University professor, says most adults seem able to overcome the harmful effects of Zika. But, he said people with compromised immune systems could face problems.

An immune system protects a person from disease and infection.

The major worry, Gleeson says, is that Zika could affect long-term memory in some adults. However, he adds that "a lot more research" is needed.

Sujan Shresta is a professor at the La Jolla Institute of Allergy and Immunology.

She notes that most adults infected with Zika do not show any health problems.

Shresta said, thanks to the new research, health officials now know "what to look for."

Kevin Enochs reported this story for VOANews. Bruce Alpert adapted the story for Learning English. Mario Ritter was the editor.

mice –n. a very small animal that has a pointed nose and a long, thin tail

certain – adj. used to refer to a quality that is noticed but that is difficult to explain or describe

birth defects – n. a disability or medical problem that a baby is born with