Update Required To play the media you will need to either update your browser to a recent version or update your Flash plugin.
By Bryan Lynn
26 August, 2016


Health officials in the southern U.S. state of Florida identified several new cases of local transmission of the Zika virus this week.

And internationally, Hong Kong joined the list of areas affected by the widespread virus.

Most of the new Florida cases were in Miami-Dade County. This is where the first case of a person becoming infected with the Zika virus within the U.S. took place earlier this month. Mosquitos mainly spread the virus, which has affected much of Latin America and the Caribbean area.

Zika can also be transmitted sexually.

The virus causes mild or no reaction in most people. But it is linked to a severe birth defect called microcephaly in pregnant women. Infected women can give birth to babies born with unusually small heads and underdeveloped brains. Microcephaly can result in mental and physical problems and even death. 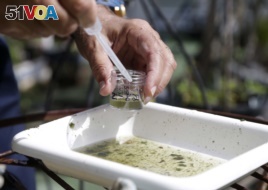 Health officials have warned pregnant women to avoid parts of Miami and other affected Florida counties. As of Friday, the state's Department of Health reported a total of 534 travel-related infections. It said the state had 43 local cases. A total of 70 pregnant women in Florida have been infected.

Earlier this month, America's top expert on infectious diseases said more cases of Zika were likely in Florida, as well as other U.S. Gulf Coast states.

Speaking to ABC News, Dr. Anthony Fauci said he thinks Texas and Louisiana will be the most vulnerable states to Zika.

Fauci heads the National Institute of Allergy and Infectious Diseases. He said the United States can expect the virus to "hang around" for as long as two more years. He added that U.S. officials need to be prepared for a "broad outbreak," although he does not think that is likely. "Hopefully, we get to a point to where we could suppress it, so we won't have any risk of it."

In Hong Kong, health officials this week confirmed the first case of Zika. The patient is a 38-year-old woman who developed symptoms August 20. She is being treated in the hospital in good condition.

Officials said the Hong Kong resident had recently traveled to the Caribbean area, where she remembered being bitten by mosquitoes.

Hong Kong officials urged the public to protect themselves from mosquitoes and warned pregnant women to avoid affected areas.

Four Southeast Asian countries have so far reported local Zika outbreaks, according to the World Health Organization (WHO). Affected countries include Indonesia, Thailand, Vietnam and the Philippines.

The WHO said that no cases of Zika have been confirmed in anyone associated with the Rio Olympics. The games ended August 21. The virus was first detected in Brazil in 2015. Tens of thousands of people are believed to have been infected there.

In the U.S. presidential campaign, Democratic candidate Hillary Clinton discussed the fight against Zika. She proposed a new fund to improve and speed up the way the federal government deals with Zika and other health emergencies.

We want to hear from you. Do you think governments and organizations are doing enough to prevent further spread of Zika? Write to us in the Comments section, and visit 51VOA.COM.

transmission – n. the spreading of something from one thing to another

mosquito – n. a small flying insect that bites the skin of people and can spreads disease

county – n. a regional area that maintains its own government

microcephaly – n. a physical condition that causes birth defects in the brain

lobby – v. to try and persuade government legislators to do something

symptom – n. a physical feeling that indicates someone has a particular illness

fund – n. amount of money collected and saved for a certain purpose