Update Required To play the media you will need to either update your browser to a recent version or update your Flash plugin.
By Dan Friedell
13 February, 2016


With the outbreak of the Zika virus in Brazil, national Olympic committees are discussing whether to send their athletes to the Games.

Brazil reported the first case of Zika virus in May 2015. The World Health Organization (WHO) said the virus could be linked to 4,000 suspected cases of microcephaly in Brazil. Microcephaly is when babies are born with small heads. Their brains do not develop properly. It is a form of brain damage.

Last week, the WHO declared the spread of Zika a global public health emergency. It said the virus could infect as many as 4 million people across the Americas. 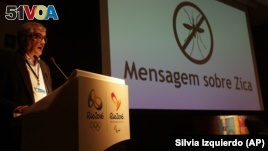 Mario Andrada, spokesperson for the Rio Olympic Organizing Committee, speaks next to a screen that reads in Portuguese : "Message about Zika" during a media briefing in Rio de Janeiro, Brazil, Tuesday, Feb. 2, 2016.

The news came as Brazil's second-largest city, Rio de Janeiro, is getting ready to host the Olympic Games in August.

Brazil President Dilma Rousseff said her "entire government is working on fighting this emergency." And its sports minister said the country has no plans to cancel the Games.

Alan Ashley is the sport performance director for the U.S. Olympic Committee (USOC). He said to the Reuters news agency that no athletes should go to Brazil "if they don't feel comfortable going."

The USA women's soccer team had an Olympic qualifying game against Costa Rica earlier this week in Texas. There, many American athletes were asked if they were concerned about Zika.

Hope Solo is the goalie for the U.S. national team. She has won two Olympic gold medals and helped the USA team win the Women's World Cup last summer.

Solo said even though she has no plans to become pregnant, she might not go to Brazil unless conditions related to Zika change.

"If I had to make the choice today, I wouldn't go," she told Sports Illustrated before the game. "I would never take the risk of having an unhealthy child."

Solo explained that women athletes have different considerations than men.

"Competing in the Olympics should be a safe environment for every athlete, male and female alike. Female athletes should not be forced to make a decision that could sacrifice the health of a child."

And the USOC said it is taking the threat of Zika seriously.

If some key athletes from the USA do not attend the Olympics, it could affect the standings.

In Kenya, officials said it is too early to consider not going to the Games.

Also, the Olympics will take place during the Southern Hemisphere's winter, which should limit the mosquito population due to cooler weather.

Dan Friedell wrote this story for Learning English based on reporting by Reuters, Sports Illustrated, and the Associated Press. Hai Do was the editor.

How do you think fears of Zika will affect the Olympics? We want to hear from you. Write to us in the Comments Section or on 51VOA.COM.

outbreak – n. a sudden start or increase of disease

goalie – n. the player that defends the goal in sports like soccer and hockey

standings – n. a list that shows the positions of the players or teams that are competing against each other