Update Required To play the media you will need to either update your browser to a recent version or update your Flash plugin.
By Christopher Jones-Cruise
18 January, 2016


The government of Zimbabwe is denying a report that President Robert Mugabe has suffered a heart attack.

Presidential spokesman George Charamba told reporters on Thursday that the report by the website ZimEye.net was false. He said the report was published to increase the number of users, or people who visit the website, so its owners could increase their earnings.

Reports that Mugabe's health is poor are common. He will be 92 next month. He leaves the country for a long vacation every January. 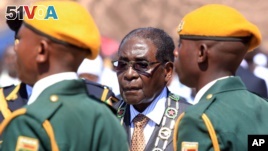 The president's spokesman does not usually react to reports about the president's health. But this time, Charamba complained about frequent reports that Mugabe has died. He said "you cannot doubt that there will be a story on the president's alleged death every January."

Mugabe has ruled Zimbabwe since 1980, when the country gained independence from Britain. He is the world's oldest head of state. He has said he does not suffer from poor health. But last year he fell down stairs at Harare airport. And in September, he read the same speech to parliament that he had given a month earlier.

His long rule and his age have created concerns about what will happen to the presidency after his death.

Some experts believe Senior Vice President Emmerson Mnangagwa will become president. But the president's wife, Grace Mugabe, has been making political moves. She is the head of the women's membership group of the ruling ZANU-PF party.

VOANews reported on this story . Christopher Jones-Cruise adapted for the story for Learning English. Kathleen Struck was the editor.

vacation - n. a period when someone spends time away from home, school or business, usually for traveling

complained - v. saying or writing about something you do not like

doubt - n. a feeling of being unsure about something

alleged - adj. accused or suspected of doing something

stairs - n. a series of steps that go from one level of a building to the next