Update Required To play the media you will need to either update your browser to a recent version or update your Flash plugin.
By Bryan Lynn
03 August, 2018

Mnangagwa received 50.8 percent of the vote, compared to 44.3 percent for his opponent Nelson Chamisa, the Election Commission reported early Friday.

The 75-year-old Mnangagwa is a member of the ruling party of Zimbabwe's longtime former leader Robert Mugabe. Mugabe ruled the country for 37 years before the country's military pressured him to resign in November. 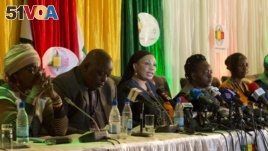 Mnangagwa said he was "humbled" by his win. "Though we may have been divided at the polls, we are united in our dreams," Mnangagwa said on Twitter.

Chamisa, leader of the opposition Movement for Democratic Change, or MDC party, rejected the results. On Twitter, he criticized the Election Commission for releasing "unverified fake results." Chamisa said the party planned to fight the election outcome in court.

The voting began Monday and was mostly peaceful, unlike past elections. But deadly violence broke out at a demonstration Wednesday in the capital, Harare. Military forces fired at demonstrators protesting unfair voting practices. At least six people were killed and 14 injured.

Mnangagwa called for an independent investigation into Wednesday's violence, saying those responsible "should be identified and brought to justice."

Police said 18 people were arrested at offices of the MDC party. The suspects were accused of "possession of dangerous weapons" and "public violence," the Associated Press reported.

Hours after Mnangagwa was declared the winner, riot police attempted to stop a press conference in Harare where Chamisa was commenting on the results. Trucks arrived with police carrying heavy sticks into a hotel where the press conference was being held, the Associated Press reported. The officers first tried to force out about 100 local and international press members covering the event, the AP said. It said later the police withdrew.

Mnangagwa addressed the incident Friday on Twitter. "The scenes today at the Bronte Hotel have no place in our society and we are urgently investigating the matter to understand exactly what happened," he tweeted. "Over the past nine months we have protected freedom of speech, of assembly and the right to criticize the government."

He added: "We won the election freely and fairly, and have nothing to hide or fear. Anyone is free to address the media at any time."

International observers praised the mostly peaceful election process, saying it was a welcome change from past election violence. But they also raised serious concerns about the military's "excessive" use of force and delays in releasing results.

Bryan Lynn wrote this story for VOA Learning English, based on reports from the Associated Press, Reuters and Agence France-Presse. Caty Weaver was the editor.

humble – adj. not proud, believing that you are not important

poll – n. the places where people vote during an election

unverified – adj. not provable that something is true

practices – n. the ways of doing something

disrupt – v. to stop something from going forward as planned

assembly – n. coming together in a group

excessive – adj. more than is necessary or wanted