Update Required To play the media you will need to either update your browser to a recent version or update your Flash plugin.
By Bryan Lynn
20 May 2022


Zimbabwe is seeking international support to be permitted to sell its supply of seized elephant ivory. Selling the ivory could earn about $600 million. Officials say the money could be used to support efforts to deal with the country's fast-growing elephant population.

Zimbabwean officials have urged the European Union (EU) and other nations to support the sale of ivory, which has been banned since 1989. The ban was enacted by CITES, the international body that governs the world's endangered species. 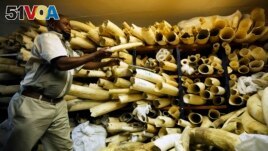 A Zimbabwe National Parks official inspects some of the elephant tusks during a tour of ivory stockpiles, in Harare, Monday, May, 16, 2022. (AP Photo/Tsvangirayi Mukwazhi)

Officials from Zimbabwe's National Parks and Wildlife Management Authority recently showed ambassadors from the EU, Canada and the United States its supply of ivory tusks. The tusks are kept in secure containers in the capital, Harare. They were all seized from poachers and collected from elephants that died.

Fulton Mangwanya leads the authority for Zimbabwe. He told The Associated Press the country has about 130 tons of ivory and 6 to 7 tons of rhino horn.

Swiss ambassador to Zimbabwe Niculin Jager spoke for the visiting ambassadors. He said the group believes strongly in the need to fight the poaching of elephants.

Later this month, Zimbabwe will be holding a gathering called an "elephant summit." Representatives from 14 African countries, as well as from China and Japan, are expected to attend. The purpose of the meeting is to consider ways to manage populations of the world's largest land animal.

"We need assistance. These elephants are multiplying at a dangerous rate," Mangwanya said.

Officials in Zimbabwe have said the country's elephant population is double the number its national parks can safely control. The country is estimated to have 100,000 elephants. Park officials say the elephants are destroying trees and plant life that are necessary for elephants and other wildlife.

Zimbabwe's elephant population is getting so big that Mangwanya warned "it will be very difficult for us to do anything but culling, which is opposed by everyone."

Neighboring Botswana has the world's largest elephant population, with more than 130,000. Together, Zimbabwe and Botswana have nearly 50 percent of the world's elephants. The two countries say they are struggling to deal with the expanding numbers. That is why they are seeking permission to sell their supplies of seized tusks.

Other African countries, such as Kenya, favor continued bans on all ivory sales in an effort to reduce international trade in ivory.

There is a strong illegal trade in ivory driven by international criminal organizations. The organizations pay poachers to kill elephants and remove their ivory tusks. The ivory is then sent to countries where it is used to make jewelry and other products.

Increased poaching and loss of habitat have made Africa's elephant populations more endangered, the International Union for Conservation of Nature said last year.

Zimbabwe has promised to use all the money from a possible ivory sale to finance conservation efforts in its wildlife parks and to support communities in those areas, Mangwanya said.

Zimbabwe argues that providing money to people who live near the parks can urge them to support the fight against poaching, instead of depending on it for money.

Reuters and The Associated Press reported on this story. Bryan Lynn adapted the reports for VOA Learning English.

We want to hear from you. Write to us in the Comments section, and visit our Facebook page.

poacher – n. a person who catches and kills animals without permission on someone else's land

conservation – n. the act of keeping something safe from harm or from being damaged or destroyed

syndicate – n. a group of people or companies who join together in order to achieve something

cull – v. to kill some of the animals in a group, especially the weakest ones, to limit their numbers

authority – n. the official power to make decisions or to control other people

multiply – v. to increase by a large number