Update Required To play the media you will need to either update your browser to a recent version or update your Flash plugin.
By Caty Weaver
21 November, 2017


Zimbabwe's President Robert Mugabe has resigned after 37 years in office.

Mugabe wrote, "My decision to resign is voluntary on my part and arises from my concern for the welfare of the people of Zimbabwe and my desire for a smooth, non-violent transfer of power."

The letter said the resignation was effective immediately. 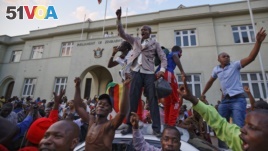 Zimbabweans celebrate outside the parliament building immediately after hearing the news that President Robert Mugabe had resigned, in downtown Harare, Zimbabwe, Nov. 21, 2017.

Celebrations broke out in parliament. Lawmakers had gathered to begin legal action to remove the 93-year-old Mugabe from office.

People also danced in the streets of Harare and blew car horns in reaction to the announcement.

The Zimbabwean military placed Mugabe under house arrest on November 15. The military took action a little more than a week after Mugabe dismissed Vice President Emmerson Mnangagwa. That dismissal appeared to put Mugabe's wife, Grace, in a position to become the next leader.

Pressure to resign increased after statement

Mugable's ruling ZANU-PF party had been pressuring him to resign since his house arrest. Hundreds of thousands of Zimbabweans publicly demonstrated in protest of the ousted president.

On Sunday, Mugabe spoke to the nation. He said he would remain in office and lead the ZANU-PF meeting in December. His statement led lawmakers to take action to remove him from office.

Opposition leader Morgan Tsvangirai of the MDC party spoke Tuesday before the resignation announcement. He said the culture of the ruling party "must end" and everyone must work together toward free and fair elections.

Mugabe has led Zimbabwe since it became a fully independent and recognized country in 1980. But the country's economy had weakened severely, leading to calls that Mugabe step down.

Caty Weaver wrote this story for Learning English based on VOA, AP and Reuters news reports. Mario Ritter was the editor.

welfare – n. the state of being happy, healthy, or successful

transfer – v. to move (someone or something) from one place to another

horn – n. a device that makes a loud noise