US Jet Goes Down in Libya Operation

Update Required To play the media you will need to either update your browser to a recent version or update your Flash plugin.
Elizabeth Arrott | Cairo
March 22, 2011 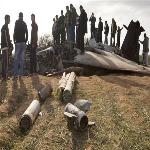 Photo: AP
Libyans inspect the wreckage of a US F15 fighter jet after it crashed in an open field in the village of Bu Mariem, east of Benghazi, eastern Libya, March 22, 2011

Heavy ground fighting was reported in several cities across Libya Tuesday, the fourth day of a U.N.-backed effort to establish a no-fly zone across the north of the country. U.S. confirmed one of its jets crash-landed while taking part in that effort.

The international coalition plans to extend the zone from the rebel stronghold of Benghazi in the east to the capital, Tripoli, 1,000 kilometers to the west.

Loyalist forces in Tripoli sent up anti-aircraft fire in an attempt to ward off strikes by fighter jets sent by the U.S., France and Britain. The U.S. said Tuesday that one of its jets crash-landed in Libya the day before. The military said the likely cause was mechanical problems, not hostile fire.

The U.S. military says both crew members have been rescued.

Despite the expanding no-fly zone coverage - part of a U.N. resolution to protect civilians from Libyan government attacks - opposition sources in two western towns report continuing fighting. Residents said pro-Gadhafi forces are on the offensive in both Misrata and Zintan, and report civilian casualties. Those claims could not be independently confirmed.

Strains in international backing for the mission increased Tuesday, with China joining the list of dissenters.

Foreign Ministry spokeswoman Jiang Yu said Beijing wants an immediate cease-fire and seeks a peaceful resolution to the conflict. China, like fellow critic Russia, abstained from backing the U.N. resolution authorizing the attacks, but did not veto the measure.

The Arab League, which initially supported the U.N. move, has also expressed reservations. All say they are concerned about possible civilian casualties and a humanitarian crisis - exactly what the measure aims to prevent.

"It's perfectly evident that the vast majority, if not nearly all civilian casualties have been inflicted by Gadhafi," said Gates. "Most of our targets, virtually all of our targets are isolated, non-populated areas."

He called Colonel Moammar Gadhafi's claims of civilian casualties "outright lies." Libyan officials say dozens of people have been killed in coalition attacks, which began Saturday. Those figures have not been independently confirmed.

A Tripoli resident, who prefers to give just his first name, Ali, said by telephone Tuesday that much of the capital was functioning normally.

Ali said the situation is good: the shops are open, there is traffic.  He adds he has not been out of the capital, but in Tripoli, it's fine.

The effort to set up the no-fly zone appeared to be helping the rebels in the east. Opposition forces had been pushed out of territory it once claimed, with fighting Saturday reaching the de facto rebel capital, Benghazi. The rebels have since been pushing back, and were engaged in heavy ground fighting with pro-Gadhafi forces Tuesday near the town of Ajdabiya.

The United Nations revealed Tuesday that, farther east, in Tobruk, the special envoy for Libya had met with rebel leaders. The Monday meeting was to elicit opposition views on the situation in Libya. It follows a visit by the envoy last week to Tripoli where he met with government leaders.