Update Required To play the media you will need to either update your browser to a recent version or update your Flash plugin.
Gary Thomas | Washington
06 January 2011

The killing of the governor of Pakistan's most populous province has highlighted the ongoing clash in Pakistani society between secularism and religious radicalism. Some of that radicalism is fueled by resentment against a privileged and often secular-minded elite who govern the country.

The death of Punjab Governor Salman Taseer, allegedly at the hands of one of his own bodyguards, has underscored what journalist Ahmad Rashid called a "very, very severe polarization" in Pakistan. 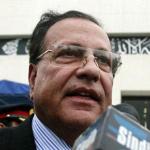 On one side, say analysts, is what is believed to be a comparatively small but vocal and determined group of Islamic radicals, some of them extreme to the point of violence. At the other is a liberal and, to varying degrees, secular elite. And caught in the middle is the average Pakistani who is buffeted by economic and political uncertainty.

Analyst Lisa Curtis of the Heritage Foundation says Pakistan's founding father, Mohammad Ali Jinnah, envisioned a multiethnic, multireligious society with Islam as a unifying force. But she says events have caused the country to drift further towards extremism.

"It's been events over the past 30 years, like the war against the Soviets in Afghanistan, the Islamization policies of General Zia ul-Haq during the 1980s, which has really strengthened the Islamist forces and the more puritanical sects in Pakistan over the more traditional and moderate Sunni sects," said Curtis.

That strength has not translated into popular votes. When Pakistan has had free and fair elections, the religious parties have fared poorly, picking up only a sliver of seats. But analysts say their power is in the street, not in the ballot box.

Political power in Pakistan has usually rested with an educated, liberal, and often wealthy elite - at least when the country was not under military rule. With his push to roll back the country's blasphemy laws, Punjab Governor Salman Taseer epitomized what radicals view as an alarming secular drift in Pakistan. Kamran Bokhari of the private intelligence firm, Stratfor, says radicals try to capitalize on that resentment against the governing class, as well as deepening economic woes, as a recruiting tool. 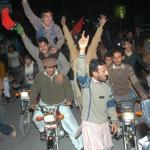 "Islamist militancy is able to nurture in this country because of that sentiment, because of that idea, this notion that somehow the ruling elite is going to tamper with religion as they know it and is working with the West to do that," said Bokhari. "So this perception can drive a lot of people. And I can understand the motivation of this individual [the assassin]."

But, expressing her own views, Professor Hayat Alvi of the U.S. Naval War College says Pakistanis' resentment of the government is not over religion, but over the basic issues of daily survival.

"When we had the floods in Pakistan, the devastating floods, a few months ago, it wasn't religion that the poor were complaining about and secular government ruling them," said Alvi. "It was that they didn't get any relief from government emergency forces to give them food, water, and the basic necessities as victims of a major natural disaster. So at the end of the day, it's bread, the issue of bread and butter and basic necessities."

Analysts say extremists have penetrated some elements of the government, especially the security agencies. Some officers of the powerful Inter-Services Intelligence directorate have been accused by officials of several governments of backing the Afghan Taliban and anti-Indian extremist groups. 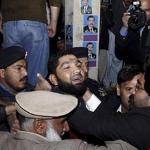 The alleged killer of Governor of Punjab, Salman Taseer, being brought to a court in Islamabad, Pakistan, 05 Jan 2011.

Lisa Curtis of the Heritage Foundation says the government sends mixed signals when some radical groups are allowed to operate unmolested by security forces.

"Unfortunately, when you have confusion at the official level in terms of groups that are conducting terrorist attacks in India - for example, the Lashkar-e-Taiba, which is allowed to function in society - and are not prosecuted, when the government is not cracking down on these extremist groups, unfortunately, I think, it emboldens the groups and it sends a signal that they're beyond punishment or they're beyond the law," said Curtis.

Questions have already been raised in the Taseer killing. The alleged assassin, Mumtaz Qadri, said he killed the governor because he was a "blasphemer." There is as yet no evidence of a wider conspiracy, but analysts have pointed out that Qadri was able to enlist in the Elite Force of the Punjab police and join the governor's protection squad despite reported warnings about his extreme religious views. Pakistani officials say Qadri pumped more than 20 bullets into the governor. No members of the security detail returned fire.