Update Required To play the media you will need to either update your browser to a recent version or update your Flash plugin.
Ayaz Gul | Islamabad
04 January 2011 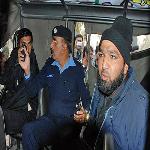 The governor of Pakistan's Punjab Province has been assassinated, allegedly by one of his security guards in Islamabad.

Pakistani Interior Minister Rehman Malik says the slain governor, Salman Taseer, was returning to his car after visiting a shopping center in the Pakistani capital when one of his armed guards sprayed him with bullets.

Witnesses say the Punjab Governor fell down and the attacker dropped his gun before surrendering to police.

Interior Minister Malik told reporters an investigation has been ordered into the incident.

The minister says the assassin told investigators he killed the Punjab governor because of Taseer's opposition to Pakistan's controversial Islamic law of blasphemy.

Governor Taseer was making efforts to secure the release of a Christian woman sentenced to death by a court for making derogatory remarks against the Prophet Mohammad.

Taseer's actions along with recent demands by human-rights groups to reform the Islamic law to prevent its misuse have angered religious parties in the country. Islamic groups have also staged street protests in recent days to warn the government against amending the law.

Federal Minister for Minorities Shahbaz Bhatti, while speaking to VOA, condemned the killing as a barbaric act. He defended the slain Punjab governor for speaking against the misuse of the Islamic law of blasphemy.

"This cowardly act of violence cannot stop people who believe that this law (blasphemy law) is being misused as a tool to victimize the innocent people of Pakistan," Bhatti said. "And I ask the government and other law enforcement agencies to investigate all those who instigated the people and issued (the) decrees against the governor."

The assassination of the provincial governor is the most high-profile killing of a political figure in Pakistan since former Prime Minister Benazir Bhutto died in an attack three years ago.

The assassination of Governor Taseer took place as Prime Minister Yusuf Raza Gilani is scrambling to keep his ruling coalition in power. His government has lost its majority in parliament in recent weeks, after two of its partners quite the governing coalition.

But speaking after a party meeting in Islamabad, Mr. Sharif demanded the government must reverse its recent hike in petroleum prices, cut government expenditures by 30 percent and take legal actions against ruling party officials allegedly involved in corruption.

The opposition leader set a three-day deadline for Prime Minister Gilani to accept the demands and then show progress within 45 days. Opposition parties have made similar demands in recent months but the Pakistani government has dismissed allegations of poor governance and corruption.