Update Required To play the media you will need to either update your browser to a recent version or update your Flash plugin.
Douglas Wissing | West Lafayette, Indiana
06 January 2011 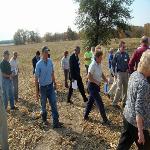 Photo: Afghanistan's Ministry of Agriculture
Afghan Agriculture Minister Asif Rahimi tours an Indiana farm with members of the Agriculture Development Team that worked closely with him in Afghanistan in 2009.

In Afghanistan, the vast majority of the population relies on agriculture for its livelihood. Three decades of war have not changed the central importance of farming in this country, only its difficulty.

Afghanistan's U.S.-educated Minister of Agriculture is considered one of his country's most innovative and effective administrators. He is working with the United States and international organizations to improve Afghan farming. That effort includes one cooperative program that teaches Afghan students modern agricultural skills.

In classrooms at Purdue University in Indiana, 12 graduate students in agriculture present their research to Afghanistan's Minister of Agriculture, Asif Rahimi, a graduate of the University of Nebraska at Omaha.

The students are part of Purdue's Advancing Afghan Agriculture Alliance, funded by the U.S. Agency for International Development (USAID). One tells the minister his project on breeding fungus-resistant wheat is already making a difference in Afghanistan.

The Alliance program began in 2007 and now includes nearly 90 students at Purdue and a few other U.S. and Indian universities with strong agricultural programs. Purdue's assistant director of International Programs, Kevin McNamara, says everyone involved is focused on enhancing Afghanistan's agrarian society. 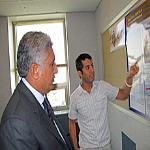 "Agriculture is very, very important. Agriculture there is very different from the U.S. In the U.S., agricultural production is about one percent of the economy," he says. "In Afghanistan, it's about one-third. In the U.S., agricultural production employs about two percent of the population. In Afghanistan, it's about 80 percent."

According to McNamara, students in the Alliance program will graduate with skills of great value to Afghanistan's agriculture sector.

"Right now we now have twelve students at Purdue. Four of them are finishing their masters degree programs, and the rest will finish by next May. But these young Afghan faculty members came to Purdue to get Masters degrees so they can go back and teach in the universities they come from. The primary one is Kabul University, but we're also working with faculty at Herat, Nangahar, Balkh and Kandahar. What we're trying to do is get these bright young people out to international schools so they can develop expertise in their disciplinary area."

Thirty years of war have had a terrible effect on Afghanistan's agricultural infrastructure. Rahimi - who was named Minister of Agriculture in 2008 - says improving that base is essential to bringing peace to his country.

To continue that success, Rahimi has a long-range modernization plan for his department.

He is relying on a team of young Afghan agricultural officials he has hired. As efforts to redevelop the country continue, many of Afghanistan's best and brightest are recruited by high-paying international organizations. But Rahimi says he manages to hold on to his people with more than good salaries.

"Also providing them incentives, training. Capacity, building all these people, providing them opportunities. Also job satisfaction," he says. "So I'm using not only the salary as one factor, but also at the same time creating an environment where people feel they are part of a transformation, the overall ownership of the ministry. That is where all of us work as a very strong team."

Transforming Afghanistan's agriculture is also complicated work, which Rahimi acknowledges will require the help of the international community. The U.S. Department of Agriculture recently announced a $38 million grant to assist his ministry with organization and training. But Rahimi says his team will take the lead in this cooperative venture.

"Follow our footsteps, because we know Afghanistan best," he says. "And provide us technical assistance that you are good at."