Update Required To play the media you will need to either update your browser to a recent version or update your Flash plugin.
Shelley Schlender | Boulder, Colorado
04 January 2011 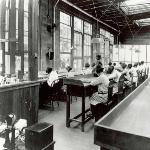 Photo: Argonne National Labs
Young women at work in the US Radium factory in Orange, New Jersey in the mid-1920s. Many became ill and died after working with radioactive glow-in-the-dark paint.

Today the U.S. government keeps an eye on health and safety in the workplace. But that wasn't always the case. Americans workers can thank a little-known factory worker for sparking the sweeping changes that now protect them on the job.

During the early 1900s, an estimated 4,000 workers - most of them women - were hired by corporations in the U.S. and Canada to paint watch faces with radium. They used camel hair brushes to apply the glowing paint onto dial numbers.

One of those workers was Grace Fryer. The newspapers called her "Pretty" Grace Fryer. She died young of a terrible cancer caused by that glow-in-the-dark paint, which contained radioactive radium which was known by scientists and plant managers to be a human health hazard. However, Fryer's employers never warned her or her co-workers of that danger.

"There was tremendous denial," says Ross Mullner, author of "Deadly Glow: The Radium Dial Worker Tragedy." "In fact, the head of the U.S. Radium Corporation would never admit that the radium actually was toxic or could kill people." Radium was hailed as a miracle cure after Marie Curie discovered it in 1898. Doctors applied ointments laced with radium to heal wounds. People swallowed spoonfuls of radium tonic, seeking to cure everything from baldness to stomach ailments. But by the 1920s, radium's health risks - including anemia and bone cancer - were better known.

Mullner says the last people to acknowledge its dangers were often the owners of radium dial factories. "At some point, they knew it was killing the women and they didn't want to ever admit it. It was just too profitable, is what it really amounted to."

In 1927, after contracting cancer, a small band of radium dial workers led by Grace Fryer, sued factory owner U.S. Radium Company. They won, establishing a legal precedent for other U.S. workers with occupation-related diseases to sue their employers. Media coverage of the so-called Radium Girls inspired the government to establish stronger safety regulations.

That culminated in 1970, with the passage of the Occupational Health and Safety Act, or OSHA. Today, OSHA regulates everything from underground mines to workplace chemicals.

The New Jersey factory where Grace Fryer worked was not the only radium plant in the country, nor was she the only worker to file a lawsuit. In 1938, Catherine Wolfe Donahue took the company she worked for in Ottawa, Illinois, to court. She was so ill by then, she had to be carried into the courtroom. Like the Radium Girls, she won her case, but died shortly after the company agreed to pay her a few thousand dollars. The Ottawa factory has been torn down, but it left a legacy of radioactivity.

In the 1980s, Ottawa resident Ken Ricci used a Geiger counter to prove that debris from the factory, used as fill throughout the town, was still highly radioactive, as was factory debris buried at a local landfill.

"We didn't know nothing about hot spots in Ottawa," says Ricci. "All we knew was the building was dangerous because the girls who worked in there got sick and a lot of them died." 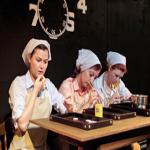 The area is now a superfund cleanup site, which qualifies for federal money. It's estimated the total clean-up will cost $100 million.

Radium paint continued to be used until the 1960's, but workers were given protective gear and taught safety precautions. Today, the U.S. requires glow-in-the-dark products to be made with non-toxic materials. Worker's health and environmental safety have higher priorities. But all that came too late for those first radium dial workers.

"They were just girls," says Eleanor Swanson, a poet who teaches at Regis University in Denver. "They made a penny and a half a dial. Painting all day long."

Swanson's research into the life of Madame Curie, and the radium dial tragedy, inspired the poem "Radium Girls."

We sat at long tables side by side in a big
dusty room where we laughed and carried
on until they told us to pipe down and paint.
The running joke was how we glowed,
the handkerchiefs we sneezed into lighting
up our purses when we opened them at night,
our lips and nails, painted for our boyfriends
as a lark, simmering white as ash in a dark room.
"Would you die for science?" the reporter asked us,
Edna and me, the main ones in the papers.
Science? We mixed up glue, water and radium
powder into a glowing greenish white paint
and painted watch dials with a little
brush, one number after another, taking
one dial after another, all day long,
from the racks sitting next to our chairs.
After a few strokes, the brush lost its shape,
and our bosses told us to point it with
our lips. Was that science?
I quit the watch factory to work in a bank
and thought I'd gotten class, more money,
a better life, until I lost a tooth in back
and two in front and my jaw filled up with sores.
We sued: Edna, Katherine, Quinta, Larice and me,
but when we got to court, not one of us
could raise our arms to take the oath.
My teeth were gone by then. "Pretty Grace
Fryer," they called me in the papers.
All of us were dying.
We heard the scientist in France, Marie
Curie, could not believe "the manner
in which we worked" and how we tasted
that pretty paint a hundred times a day.
Now, even our crumbling bones
will glow forever in the black earth.

The story of the radium dial tragedy has also been told in a novel and short story, and on stage, TV and film.

And on National Workers Memorial Day in April, the town of Ottawa plans to unveil a bronze statue on the site of the former Radium Dial and Luminous Processes plant, to honor the suffering and sacrifice of the factory's workers.