Update Required To play the media you will need to either update your browser to a recent version or update your Flash plugin.
Peta Thornycroft
05 January 2011 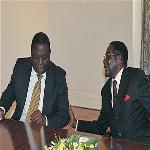 Photo: AP
Zimbabwean President Robert Mugabe, right, chats to Prime Minister Morgan Tsavangirai during their end of year press conference at State House in Harare, saying they were dispelling rumors of disunity in the Government of National Unity, Dec. 20, 2010

Although Zimbabwe President Robert Mugabe's ZANU-PF party seems to have accepted, in public at least, that elections are not possible before year end, many new black farmers north of the capital were told Tuesday by senior army personnel there would be "war" if ZANU-PF didn't win the next poll.

An officer in the Zimbabwe National army, accompanied by several colleagues, addressed new farmers at what used to be called the Ayshire Country Club.

Many farmers and workers attending the ZANU-PF rally now occupy white-owned land given to them by Mugabe in a process that began in 2000. One of at least five rallies in that farming district about 120 kilometers northwest of Harare, was held at the old club.

Among those who said he was compelled to attend the rally was a 46-year-old laborer who asked not to be identified. He said all new farmers and their workers in the district were ordered to attend the six-hour rally, which was addressed by several well-known personnel from the national army.

He provided names of the main speakers. The man said the military provided transport for farmers and their workers to attend the rallies. He said farmers were anxious when a team of ZANU-PF aides questioned them about their finances.

He said some also were anxious because they were forced to interrupt work during the peak of the summer agricultural season.

The message given to those at the rally was that "If ZANU-PF and President Mugabe do not win the next elections, there will be war."

A commercial traveler, who also requested anonymity, said he had counted five ZANU-PF rallies, including the one at Ayshire Country Club.

Mugabe's ZANU-PF is in a coalition government with the Movement for Democratic Change, which won the last parliamentary elections in 2008.

On Sunday, the state newspaper, The Sunday Mail, which usually reflects ZANU-PF opinion, said it was unlikely that simultaneous presidential and legislative elections could be held in 2011.

Zimbabwe has committed to a new constitution before fresh elections, but parliament says a new charter will not be ready before September.

Mugabe told party faithful last month he was uncomfortable within the inclusive government and that new elections should be held this year to end power sharing with the MDC, which he described as a "puppet" of the west.

Since then, South African mediators on behalf of the Southern African Development Community, which guaranteed Zimbabwe's multi-party political agreement, said they will draw up a road map of reforms necessary before new elections.

In a public opinion survey by Afrobarometer that was released Wednesday a majority of people interviewed last October said memories of previous elections contributed to their fears of ZANU-PF violence in any upcoming poll.

The mobile telephones for senior ZANU-PF officials, including the party chairman, the party spokesman and the ZANU-PF defense minister in the inclusive government were all switched off Wednesday.