A Century of U.S. - Canada Cooperation on Migratory Birds

Update Required To play the media you will need to either update your browser to a recent version or update your Flash plugin.
By VOA
Sep 3, 2016


The skies of North America today provide the backdrop for celebrating a century of conservation of one group of Earth's most treasured animals: migratory birds.

On August 16, 1916, the United States and Great Britain (on behalf of Canada) signed the first Migratory Bird Treaty (known in Canada as a Convention) to protect these shared natural resources.The treaty was the first international agreement forged to protect wild birds and among the first to protect any wildlife species. 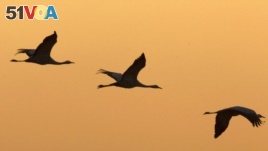 “Our two countries' conservation efforts have yielded real results, especially for waterfowl populations. I am proud of the work we have done, but as the recent release of The State of North America's Birds report has shown, we have a challenging road ahead,” said Catherine McKenna, Minister of Environment and Climate Change Canada. “I know we are up to the task, and I look forward to building on our successes, together, to recover other migratory bird species.”

“It's hard to imagine the North American continent without egrets, ducks, hawks or songbirds, but at the turn of the 20th century, that's the way things were looking,” said Dan Ashe, Director of the U.S. Fish and Wildlife Service, which has responsibility for conserving and managing migratory birds and their habitats across the United States.

“This treaty marked a turning point in the fate of our shared bird life, and it continues to this day to unite efforts in the United States and Canada to protect our shared birds across our international boundaries.”