A Fight Worth the Cost

Update Required To play the media you will need to either update your browser to a recent version or update your Flash plugin.
By VOA
Jul 21, 2017


In his recent keynote address in Warsaw, President Donald Trump spoke of the fight waged by the Polish people in the twentieth century against the totalitarian forces of Nazism and Communism, and praised Poland as “an example for others who seek freedom and who wish to summon the courage and the will to defend our civilization.” He celebrated the cultural and political values of the West, as well as challenges now confronting their survival.

“Americans, Poles and the nations of Europe value individual freedom and sovereignty. We must work together to confront forces, whether they come from inside or out, from the South or the East, that threaten over time to undermine these values and to erase the bonds of culture, faith and tradition that make us who we are.”

Who we are, said President Trump, are people who “pursue innovation...treasure the rule of law and protect the right to free speech...empower women as pillars of our society and our success:”

“And above all, we value the dignity of every human life, protect the rights of every person, and share the hope of every soul to live in freedom.”

President Trump emphasized the necessity of “a strong alliance of free...nations to best defend our freedoms and interests.” That is why the United States, he said, insists that all NATO members meet their financial obligations, and why the United States “has demonstrated not merely with words, but with its actions, that we stand firmly behind Article 5, the mutual defense commitment.”

The current adversaries of our civilization and values, President Trump said, include radical Islamic terrorism, which seeks to export its violent oppression around the globe; as well as powers that seek “to test our will, undermine our confidence, and challenge our interests” through cyber warfare, financial crimes and propaganda. 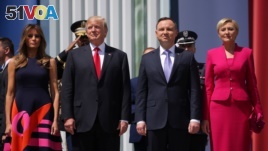 He called for a unified effort, including from the leaders of more than 50 Muslim nations, to defeat radical Islamic terrorism; and he urged Russia to stop its destabilizing activities in Ukraine and join responsible nations in their fight against common enemies and in defense of civilization.

But that defense, said President Trump, demands a commitment of will: “The fundamental question of our time is whether the West has the will to survive. Do we have the confidence in our values to defend them at any cost?”

If that answer is yes, then, President Trump declared, like the courageous Polish people of the twentieth century, “Our values will prevail...And our civilization will triumph.”