A New Directive Aimed at ISIS

Update Required To play the media you will need to either update your browser to a recent version or update your Flash plugin.
By VOA
Feb 3, 2017

“We will reinforce old alliances and form new ones and unite the civilized world against radical Islamic terrorism, which we will eradicate from the face of the Earth.”

In a presidential memorandum signed January 28, President Trump called ISIS “among the most vicious and aggressive” threats from radical Islamic terrorism faced by the United States.

He recalled the beheadings of American citizens James Foley, Steven Sotloff, and Peter Abdul-Rahman Kassig, as well as the death of Kayla Mueller. He pointed to the ISIS-inspired attacks in the United States; the complicity of ISIS in the terrorist attacks in Paris, Brussels, and Berlin; ISIS' systematic campaign of persecution and extermination in those territories it enters or controls. 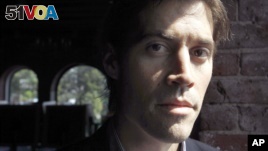 President Trump directed the Secretary of Defense to deliver in 30 days a preliminary draft of a comprehensive plan to defeat the terrorist group. The plan would be developed with the participation of the secretaries of State, Treasury and Homeland Security, as well as the director of national intelligence, the chairman of the Joint Chiefs of Staff, the assistant to the president for national security affairs and the assistant to the president for homeland security and counter-terrorism.

At a press briefing, White House Spokesperson Sean Spicer said the plan must include recommended changes to any United States rules of engagement and other U.S. policy restrictions that exceed the requirements of international law regarding the use of force against ISIS, as well as other measures:

“Public diplomacy, information operations and cyber strategies to isolate and delegitimize ISIS and its radical Islamist ideology; identification of new coalition partners in the fight against ISIS and policies to empower coalition partners to fight ISIS and its affiliates; mechanisms to cut off ISIS financial support, including financial transfers, money laundering, oil revenue, human trafficking, the sales of looted art, historical artifacts, and other revenue sources, and a detailed strategy to fund the plan.”

“The President's clear objective is to defeat and destroy ISIL, and...to do it systematically. This is not only a necessary step for America's national security,” Mr. Spicer said, “it is also a humanitarian imperative...The United States must take decisive action, and the President is taking the necessary steps.”