Update Required To play the media you will need to either update your browser to a recent version or update your Flash plugin.
By VOA
Nov 30, 2016


In less than one year, the global community has made tremendous progress in addressing the numerous issues that negatively affect our climate. Last December, nearly 200 countries concluded negotiations of the Paris Agreement, which aims to limit the temperature increase to 1.5 degrees Celsius; the agreement entered into force in November 2016.

Around the same time, the International Civil Aviation Organization adopted an unprecedented global market-based measure that puts the international aviation industry on a path toward sustainable, carbon-neutral growth. And finally, 200 Parties of the Montreal Protocol agreed to the Kigali Amendment that will gradually reduce the production and consumption of hydrofluorocarbons, powerful greenhouse gases that are commonly used in refrigeration. 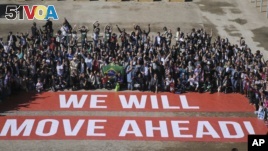 And as the world moves toward sustainable energy production, the clean energy market is booming. This trend will only become more pronounced, said Secretary of State John Kerry at the recently-held 22nd Conference of the Parties to the United Nations Framework Convention on Climate Change.

Last year alone, “investment in renewable energy was at an all-time high – nearly 350 billion dollars,” he said, “That 350 billion is the first time that we've been able to see that money outpacing what is being put into fossil fuels. An average of half a million new solar panels were installed every single day last year. And for the first time since the pre-industrial era, despite the fact that you have global prices of oil and gas and coal that are lower than ever, still more of the world's money was invested in renewable energy technologies than in new fossil fuel plants.”

“Today our emissions are being driven down because market-based forces are taking hold all over the world,” said Secretary of State Kerry. “Most businesspeople have come to understand: investing in clean energy simply makes good economic sense. You can make money. You can do good and do well at the same time,” he said.

“Ultimately, clean energy is expected to be a multitrillion dollar market – the largest market the world has ever known. And no nation will do well if it sits on the sidelines, handicapping its new businesses from reaping the benefits of the clean-tech explosion.”