Update Required To play the media you will need to either update your browser to a recent version or update your Flash plugin.
Joe DeCapua
July 20,2015


New research shows that more than 30 years into the HIV/AIDS epidemic, African women living with the HIV still face much stigma and discrimination. The study says it’s affecting efforts to prevent mother-to-child transmission of the AIDS virus.

The community-led research was commissioned by the World Health Organization and done in Kenya, Namibia and Nigeria. The study was conducted by the International Community of Women Living with HIV – or ICW -- and the Global Network of People Living with HIV.

Margaret Happy is an ICW advocacy officer based in Kampala, Uganda. She said stigma and discrimination in health care settings “is hampering efforts to scale-up early infant diagnosis of HIV.” 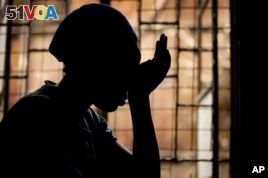 n this photo taken Monday, Feb. 16, 2015, a 16-year-old HIV-positive Kenyan girl, whose mother died from AIDS-related complications, recounts her experiences on condition of anonymity because of her age and to avoid stigma in her community, at a center run by a Kenyan non-governmental organization in the Korogocho slum neighborhood of Nairobi, Kenya. (AP Photo/Ben Curtis)

Happy said despite current information about HIV prevention efforts, many health providers and employees in Africa fail to acknowledge it. For example, the use of antiretroviral drugs to prevent infection.

“They already know that treatment is prevention. Although most of them have heard that if someone is on HIV is on treatment – is on ART treatment – he or she is less infectious – they still think that provided someone has been tested HIV positive the person can still infect them. So, due to lack of information, due to limited information by health service providers, they still have that stigma,” said Happy.

But she also said there’s an attitude problem among many health workers.

One Nigerian woman said in the report that instead of talking to her, nurses shouted and laughed at her because of her HIV status.

Happy said pregnant women are often surrounded by relatives when they go to health care facilities or are giving birth. The relatives may not know the woman is HIV positive until health workers test the child for HIV.

Happy said that HIV positive women often impose stigma upon themselves because of their economic dependence on men, either as daughters, partners or spouses. Fear of separation, divorce or violence can prevent women from disclosing their HIV status.

The report is entitled Early Infant Diagnosis: Understanding the Perceptions, Values and Preferences of Women Living with HIV in Kenya, Namibia and Nigeria. It was released at the 8th International AIDS Society Conference on HIV Pathogenesis, Treatment and Prevention in Vancouver, Canada.

The World Health Organization is considering new recommendations based on the study. One would be to test infants born to women living with HIV at birth and then again four to six weeks later. Supporters said this would reduce a woman’s anxiety about her baby’s health. Another recommendation would be to teach the women how to care for and feed the infant early on.

The report also called for women living with HIV “to be provided with information about testing options to give them time to make an informed choice about when to test. The ICW said the choice must be respected and the human rights of the mother protected.

UNICEF, the U.N. Children’s Fund, reported about 900 children are newly infected with HIV every day, nearly all of them in sub-Saharan Africa. It said 57 percent of pregnant women living with HIV received antiretrovirals to prevent the virus from being transmitted to their babies. But UNICEF also said only 35 percent of infants born to HIV positive mothers in low and middle income countries were tested for the virus within the first two months of life.