Update Required To play the media you will need to either update your browser to a recent version or update your Flash plugin.
By Anita Powell
Jan 24, 2017
JOHANNESBURG —

As African heads of state look at big issues across this continent at this year's African Union summit, they also need to make a big internal decision: They need a new leader.

AU commission chairwoman Nkosazana Dlamini-Zuma is on borrowed time after heads of state extended her term.

Analyst Liesl Louw-Vaudran says this is likely to head the agenda.

"The hot issue is electing a new chairperson for the African Union commission," she said. "It was postponed last year, and really heads of state can't wait another six months to get a consensus. That's top of the agenda."

Other issues include stopping the ethnic violence in South Sudan and rescue the country's crumbling peace process. Also, the ongoing humanitarian crises and conflict in Somalia and the Lake Chad Basin.

The continuing debate over the International Criminal Court is one area where the new AU chairperson could set the tone, especially as three African countries plan to leave the ICC.

Kaajal Ramjathan-Keogh of the Southern Africa Litigation Center said the court is, for many in Africa, the only source of justice for heinous crimes committed by the powerful. 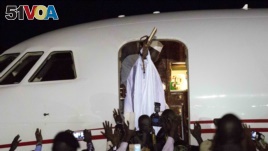 The political stand-off in the Gambia is over. Jammeh has left. But open society campaigner Jeggan Grey-Johnson says that there is still unfinished business in the tiny West African nation -- and he intends to push the AU to confront Jammeh's alleged crimes.

"At some point in time there has to be consequences for such actions and such attempts at entrenching impunity," he said.

And on top of all of this, the AU must decide whether to allow this 54-member body to become 55. Morocco quit in 1984 after the AU recognized the independence of Western Sahara from Morocco.

According to Louw-Vaudran for many countries this is a choice between Morocco and Western Sahara.

"The AU could do with a little help now that Libya, which used to be one of the biggest funders, is no longer supporting the AU," she said. "So in many ways the AU could benefit from Morocco, but there are many countries who strongly feel that the Western Sahara issues is one of occupation, it needs to be independent."

It's an ambitious agenda for the 54-year-old organization and its leaders, who have just days to tackle these many issues. But, as the AU has long said, this is about coming up with African solutions to African problems.