Update Required To play the media you will need to either update your browser to a recent version or update your Flash plugin.
Joe DeCapua
March 11,2015


A new report ranks countries according to the disaster risk faced by older people. It says those in Somalia, Central African Republic and Afghanistan face the highest risk due to conflict and a lack of social services. The findings are being released prior to the U.N. World Conference on Disaster Risk Reduction (3/14-18) in Sendai, Japan.

HelpAge International has released its first Disaster Risk and Age Index, which evaluates 190 countries. It’s estimated 66 percent of those 60 years old and above live in less developed countries. HelpAge says that figure is expected to rise to nearly 80 percent by 2050. That’s over two billion people.

HelpAge CEO Toby Porter said, “There’s quite rightly enormous interest globally at the moment in disaster risk reduction. I think an understanding that the world needs to invest in helping communities prepare for disasters and be more resilient when they do happen. But something that hasn’t been so well internalized or understood is how vulnerable older people are to disasters and more vulnerable than other members of the community.”

He gave 2005’s Hurricane Katrina as an example. The storm slammed into the southern U.S. city of New Orleans. 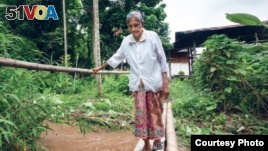 And 56 percent of those who died in Japan’s 2011 Tsunami were age 65 and older, even though they made up only 23 percent of the population.

“Obviously, there are certain physical infirmities that come with older age. So, for example, a decreased ability to exit fast from an area where there may be a tsunami wave coming or to flee insecurity. There may be an instance whereby communities use disaster drills with whistles or sirens. You might have an older person in the community who may be hard of hearing. You might get someone who’s housebound and not able to see the dangers coming,” he said.

Protection of older populations, Porter said, will only grow in importance.

“The population is getting older, which is a wonderful thing. The reason that populations are getting older is because we’re all living in an era where every year people can expect to live longer and healthier lives. Often people think that population aging is just a developed world phenomenon -- or concentrated in countries like the U.S. and Canada and Western Europe. But actually populations are aging around the world and the fastest growing regions are Asia and Latin America.”

He said the world must adapt its health care, economies and social welfare to an aging population.

“If you speak to an older person regardless of which country, regardless of which culture or religion or background they come from, they’ll often talk about four major concerns. What kind of health am I in? Do I feel that I have enough money? Am I safe and living free from violence, discrimination or other forms of elder abuse? And fourth and a very important one – am I listened to? Do I have a say? Is my voice heard?”