An Agreement with Qatar

Update Required To play the media you will need to either update your browser to a recent version or update your Flash plugin.
By VOA
Jul 13, 2017


The United States and Qatar have signed a memorandum of understanding laying out a series of steps aimed at stopping the flow of financial support to terrorist groups and at intensifying the two countries' global counterterrorism activities.

At a press briefing in Doha alongside of Qatari Foreign Minister Sheikh Mohammed bin Abdulrahman al-Thani, Secretary of State Rex Tillerson said the bilateral agreement was the result of weeks of intensive discussions, and that it reinvigorates the spirit of the Riyadh summit. 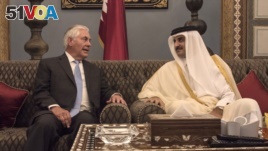 That Arab-Islamic-American summit took place in May and focused on the necessity for Muslim leaders to unite to drive out terrorism from their midst and crush the ideology that supports it. Among the summit's initiatives, was the inauguration in Riyadh of the Global Center for Combating Extremist Ideology to monitor and counter terrorist messaging.

Secretary Tillerson applauded the Emir of Qatar for being the first to respond to President Donald Trump's call to combat terrorist financing.

The signing of the bilateral agreement between the U.S. and Qatar comes in the midst of a continuing diplomatic crisis between Qatar and a number of Gulf region countries over claims that Qatar supports terrorism and is too close to Iran. Qatar has refused to accede to a series of demands presented by the countries, and the impasse, as well as the blockade, continues.

The United States supports the efforts of the Emir of Kuwait who is acting as a mediator in the conflict.

Secretary Tillerson has emphasized that the United States and its allies and partners “are stronger when they are working together towards one goal, which we all agree, is stopping terrorism and countering extremism.”

Speaking about bilateral agreement between the U.S. and Qatar, Secretary Tillerson said, “Together, the United States and Qatar will do more to track down [terrorist] funding sources, will do more to collaborate and share information, and will do more to keep the region and our homeland safe.”

The United States has one goal: drive terrorism off the face of the Earth.” —Secretary of State Rex Tillerson

Mr. Tillerson was clear that terrorism is the great challenge facing the region and the world.

“The United States,” he said, “has one goal: drive terrorism off the face of the Earth,” adding, in President Trump's words, that “Every country in the region has an absolute duty to ensure that terrorists find no sanctuary on their soil.”