Ahead of Srebrenica Anniversary, Lessons to Be Learned

Update Required To play the media you will need to either update your browser to a recent version or update your Flash plugin.
Robert Raffaele
July 08,2015


WASHINGTON— On July 11, Bosnia will mark the 20th anniversary of the worst mass killing in Europe since World War II: the massacre at Srebrenica. During an 11-day period in July 1995, an estimated 8,000 Muslim men and boys were slaughtered during the Bosnian war. Experts say the events of 20 years ago should motivate nations to work harder at preventing future conflicts.

For those who lost husbands and sons 20 years ago during the Srebrenica massacre, the wounds are still fresh.

During ceremonies Saturday marking the anniversary, recently-identified remains of 136 victims will be interred.

U.S. Ambassador Stephen Rapp said the international community must take greater steps to intervene to help dissipate ethnic tensions in Bosnia and elsewhere. He spoke at a panel discussion in Washington hosted by VOA. 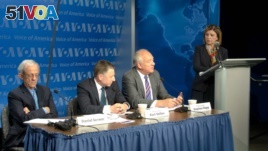 Ambassador Stephen Rapp, Kurt Volker and Daniel Serwer participate at a panel discussion on the Srebrenica massacre in Washington hosted by VOA, July 8, 2015.

"I think part of what we need to work for is for greater integration within the region, both within Europe and internally, recognizing the common interests of people in Bosnia for a prosperous future and a future where people can live together whatever their ethnicity, whatever religion they follow," said Rapp.

A lasting impact of the war in Bosnia is its troubled economy, according to Tanya Domi of Columbia University, speaking via Skype.

"Formal unemployment is 40 percent, and with [Bosnia's] youth, it is approaching 60 percent, according to the World Bank. This is simply unsustainable and people are leaving. And I think what you are seeing is a second 'brain drain' leaving Bosnia, and in fact, the future is leaving Bosnia," said Domi.

Milosevic died in prison in 2006. Mladic and Karadzic are still facing the war crimes tribunal. Three others, including two senior Bosnian Serbs, have been convicted of genocide.

Ambassador Rapp said that even if justice is slow in coming for the crimes of Srebrenica, it will come. 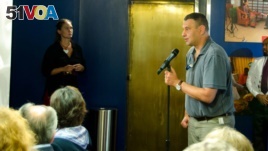 A question being asked at a panel discussion on the Srebrenica massacre in Washington hosted by VOA, July 8, 2015.

"The day will come when persons who target the innocent, who attempt to destroy whole groups, on whatever motivation, that those people will face justice. And I think that out of Srebrenica the world has gained powerful lessons that all of us need to implement every day,” he said.

Even in the face of those lessons, there are those who still deny the atrocity.

Wednesday, Russia vetoed a draft U.N. resolution condemning the massacre as an act of genocide, despite two international courts having declared it so.