Alarm at Extrajudicial Executions in DRC

Update Required To play the media you will need to either update your browser to a recent version or update your Flash plugin.
By VOA
Feb 25, 2017


The United States is deeply concerned about the events depicted in a shocking video that appears to show the summary execution of unarmed civilians by elements of the armed forces of the Democratic Republic of Congo. 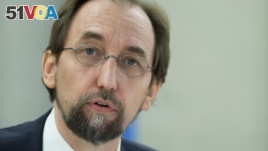 According to the United Nations High Commissioner for Human Rights, Zeid Ra'ad Al Hussein, “There are multiple, credible allegations of massive human rights violations in Kasai, Kasai Central, Kasai Oriental and Lomami provinces, amid a sharp deterioration in security situation there, including people being targeted by soldiers for their alleged affiliation with a local militia.”

The Democratic Republic of the Congo continues to confront significant political, economic, social, and security challenges. Key among these challenges is the need for security sector reform and an end to impunity. Progress in this area, not just in the Kasais but throughout the DRC's vast territory, will require significant political leadership and will. A more stable security environment and long-lasting peace will also require political stability and accountability.

To this end, we continue to urge all sides to make swift progress in implementation of the December 31 agreement, so that the DRC can hold credible elections in 2017 and proceed to a peaceful, democratic transfer of power.

“We call upon the Government of the Democratic Republic of Congo,” said Acting Spokesperson Toner, “to launch an immediate and thorough investigation, in collaboration with international organizations responsible for monitoring human rights, to identify those who perpetrated such heinous abuses, and to hold accountable any individual proven to have been involved.”

At the same time, we cannot lose focus on continued insecurity in eastern DRC where decades of conflict between rival militias have resulted in human rights violations, economic hardship, and continued insecurity. The financing of armed groups from the illicit trade in minerals remains a concern despite progress in responsible sourcing.

Peace, security, and political stability are all keys to the DRC realizing its potential. The United States continues to stand as a partner with the Congolese people to hold those who commit human rights violations accountable as we work together to support a stable, democratic and prosperous DRC.