Update Required To play the media you will need to either update your browser to a recent version or update your Flash plugin.
By VOA
Jan 10, 2018

These designations impose strict sanctions on foreign individuals determined to have committed, or pose a significant risk of committing, acts of terrorism that threaten the security of U.S. nationals or the national security, foreign policy, or economy of the United States. 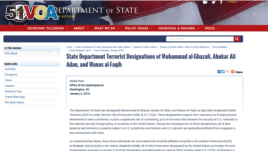 As a result of these designations, all of the terrorists' property and interests in property subject to U.S. jurisdiction are blocked, and U.S. citizens are generally prohibited from engaging in any transactions with them.

Muhammad al-Ghazali, Abukar Ali Adan, and Wanas al-Faqih are all associated with al-Qaida affiliates: al-Qaida in the Arabian Peninsula, al-Shabaab, and al-Qa'ida in the Islamic Maghreb, all of which have been designated by the United States as Foreign Terrorist Organizations.

Al-Ghazali is a senior member of Al-Qaida in the Arabian Peninsula who is involved in internal security and training of the group's operatives. Abukar Ali Adan is deputy leader of al-Shabaab. Wanas al-Faqih is an Al-Qaida in the Islamic Mahgreb associate who planned the March 18, 2015 Bardo Museum attack in Tunis, Tunisia that killed at least 20 people.

These designations notify the U.S. public and the international community that Muhammad al-Ghazali, Wanas al-Faqih, and Abukar Ali Adan have committed acts of terrorism. Terrorism designations expose and isolate organizations and individuals, and deny them access to the U.S. financial system. Moreover, designations can assist the law enforcement activities of U.S. agencies and other governments.

These designations are part of a comprehensive U.S. strategy to defeat the terrorist threat, wherever it lurks.