Update Required To play the media you will need to either update your browser to a recent version or update your Flash plugin.
By VOA
Apr 20, 2018


U.S. pastor Andrew Brunson went on trial in Turkey this month for alleged ties to terrorism and espionage. He is a Presbyterian minister who lived in Turkey for more than 20 years and served a small church in the southwestern city of Izmir. He has been detained for the past 18 months.

The Turkish government alleges that Pastor Brunson has ties to the Kurdistan Workers' Party, or PKK, a terrorist group. It also alleges he has ties to the network of a U.S.-based Muslim cleric Fethullah Gulen, who the Turks accuse of launching a coup attempt in 2016.

On the first day of his trial, Brunson denied the alleged ties to Kurdish terrorists or Gulen's network. "I don't accept any of the allegations or accusations," he told the court. He went on to say, "I haven't done anything against Turkey. On the contrary, I love Turkey. I have been praying for Turkey for 25 years." 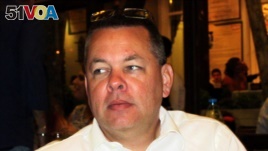 Andrew Brunson, a Christian pastor from North Carolina, U.S. who has been in jail in Turkey since December 2016. (File)

In a statement, State Department spokesperson Heather Nauert said, “We have seen no credible evidence that Mr. Brunson is guilty of a crime and are convinced that he is innocent. We believe that Turkey is a state bound by the rule of law, and we have faith in the Turkish people's commitment to justice. We hope that the judicial system in Turkey will resolve his case in a timely, fair, and transparent manner.”

Sam Brownback, United States Ambassador-at-Large for International Religious Freedom, attended Pastor Brunson's trial. He stressed that "The [Trump] administration is deeply concerned about this case.” He added, “We completely believe factually he is innocent. . . .We are hopeful that the judicial system will find that, that he will be. . .released soon.”