Update Required To play the media you will need to either update your browser to a recent version or update your Flash plugin.
By VOA News
Oct 17, 2016


LONDON — Australia's treatment of asylum seekers amounts to torture under international law, according to a new report by the human rights group, Amnesty International. About 1,200 asylum seekers have been forcibly transferred to what Australia calls an offshore processing center on the Pacific island of Nauru. Amnesty interviewed refugees and whistleblowers from companies contracted to run the asylum centers. 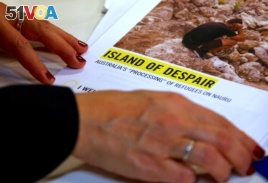 Anna Neistat, senior director for research with Amnesty International, talks to journalists as she holds a copy of a report she co-authored titled 'Island of Despair - Australia's "Processing" of Refugees on Nauru,' in Sydney, Australia, October 17, 2016

“Essentially they have chosen to treat women, men and children with unspeakable cruelty on Nauru as a way to implement a policy designed to prevent boats arriving in Australia,” said Audrey Gaughran, head of global issues at Amnesty International.

The group says many refugees have mental health problems, adding it has documented cases of self-harm and suicide. 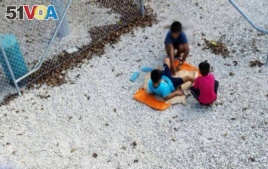 An undated supplied image from Amnesty International claiming to show children playing near a fence at the country's Australian-run detention centre on the Pacific island nation of Nauru.

Even refugees who have successfully applied for asylum in Australia are being forced to stay on Nauru. Among them is Eli, an Iranian human rights activist who says via Skype she has been given refugee status.

“After three years that my case got a positive result [for my asylum application], and I am a refugee now, but I am still in Nauru. No third country, no Australia, no way, no way... I am still in the jail,” she said.

“Porous borders drain away public support for multiculturalism, for immigration, for aid to refugees," he said. "Most importantly, the only way to stop the scourge of people smuggling is to deprive the people smugglers of their product, and secure borders do just that.”

Amnesty describes that position as untenable — and is calling on Australia to shut down its offshore processing centers and allow legitimate refugees to enter Australia.