Update Required To play the media you will need to either update your browser to a recent version or update your Flash plugin.
Joe DeCapua
July 07,2015


Amnesty International has reported migrants, asylum seekers and refugees fleeing conflict and violence often face abuse and extortion in Europe. The rights group said many also find themselves in legal limbo in Macedonia, Serbia and Hungary.

While about 60 thousand migrants and refugees have crossed the Mediterranean from Libya to Europe, an equal number has taken a different route. They first travel to Turkey, followed by a short boat ride to the Greek islands. From there, they try to make their way through Macedonia, Serbia and Hungary. That’s the group Amnesty International is raising concerns about in its new report, Europe’s Borderlands.

Amnesty’s Balkans team researcher Sian Jones is tracking their movements. She said, “What we’re finding is that at each of the borders there are pushbacks. People are being pushed back from Macedonia into Greece. And there is quite a large presence at the border of Macedonian police and we understand maybe some Macedonian military.”

Refugees and migrants have been taking the Balkans route since 2014. Most are Syrians, but others are from Afghanistan, Egypt, Eritrea, Iraq, Nigeria, Somalia, Sudan and Tunisia. 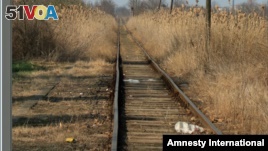 She said, “What we do is we follow the journey that people make through the region and we look at the human rights violations.”

There are other dangers. Nearly 30 are believed to have been struck and killed by trains in the Balkans. The refugees and migrants follow the rails to towns and cities.

“They’re also subject to abuses by armed gangs who rob them, steal their money, beat them up,” said Jones.

If they’re arrested along with a smuggler, she said, they’re held as a witness, often in harsh conditions.

“They’re detained at what’s called the reception center for foreigners, which is a place called Gazi Baba, which has been condemned by the U.N. Committee Against Torture and various other human rights bodies as inhuman and degrading in terms of the conditions there.”

And they can be detained indefinitely.

She said photos of the Macedonian detention center that were smuggled out show conditions are “appalling.”

“There can be up to 400 people there detained at any one time and there are two working showers in the men’s section. Families are separated. Children are detained. Not only children and families, but also unaccompanied minors.”

Amnesty reported that migrants, refugees and asylum seekers are regularly detained in Serbia. But many reach the northern town of Subotica about 30 kilometers from the Hungarian border. Here is where they may make arrangements with smugglers to get them across the European Union border. While waiting, most find accommodation in an old and unused brick factory known as the “jungle.” There, they try to hide from the police. Aid agencies have been providing food, clothing and shoes there since 2011.

The rights group said some refugees and migrants told them Serbian police pushed, slapped, kicked and beat them at the border with Hungary.

The Amnesty report does not go into detail about conditions in Hungary. However, it said those who claim asylum there are detained and fingerprinted.

The Hungarian parliament has passed new laws tightening its asylum rules. The laws spell out how the government can erect a fence along the Serbian border. They also make it easier to reject asylum claims. The U.N. and the Council of Europe have criticized the new laws.

Jones said Amnesty is calling for legal and safe routes into Europe.

“I was interviewing some Syrians and they said why can’t we apply at an embassy? Why do we have to be illegal? People are being criminalized by this journey. They’re being arrested for being irregularly in the country. They’re given no status. They may be detained in Serbia for being illegally in the country, even if they are asylum seekers. And that’s actually against the refugee convention. So we’re looking for measures that would not criminalize them.”

She said it’s a European problem. She said they arrive in Greece, an EU country, which is not able to deal with them. And they make their way to Hungary, another EU state.

“We’re also asking the EU to make sure that they support Serbia and Macedonia in developing an effective asylum system so people, who aren’t really fussy about where they claim asylum, would be able to claim asylum there. But essentially, it’s not really a problem that Serbia and Macedonia can resolve on their own. It really needs to be looked at in the context of the whole migration policy of the EU.”

Since Serbia wants to be an EU member state, Amnesty said it could be pressured to take action on establishing “effective asylum.” It added, “The increasing numbers of refugees and migrants taking the western Balkans route can, in part, be attributed to measures taken by the EU to enhance controls at other land borders.”

A large number hope to make it to Germany or Sweden where they have family or friends.