Update Required To play the media you will need to either update your browser to a recent version or update your Flash plugin.
By VOA
Aug 15, 2017


The Foreign Ministers of the Association of Southeast Asian Nations, or ASEAN, reiterated their grave concerns over the escalation of tensions in the Korean Peninsula, including the most recent testing by North Korea of intercontinental ballistic missiles, or ICBMs, on the 4 and 28 of July of this year and previous ballistic missile launches and two nuclear tests in 2016.

These developments seriously threaten peace, security and stability in the region and the world. In this regard, ASEAN foreign ministers called on North Korea to immediately comply with its obligations under all relevant U.N. Security Council Resolutions. 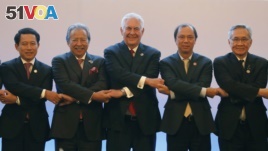 ASEAN nations reiterated their support for the complete, verifiable, and irreversible denuclearization of the Korean Peninsula in a peaceful manner, called for the exercise of self-restraint, and underscored the importance of creating conditions conducive for dialogue to de-escalate tensions.

The foreign ministers strongly called on North Korea, as a participant of the ASEAN Regional Forum, or ARF, to help realize the ARF Vision to maintain the Asia-Pacific as a region of lasting peace, stability, friendship and prosperity.

Speaking in Manila, U.S. Secretary of State Rex Tillerson underscored that the new U.N. sanctions and ASEAN statement "send a strong message that North Korea understands the expectation of the rest of the international community going forward."

The hope is that North Korea will choose a different pathway, said U.S. Secretary of State Rex Tillerson, "and when the conditions are right that we can sit and have a dialogue around the future of North Korea so that they feel secure and prosper economically."