Update Required To play the media you will need to either update your browser to a recent version or update your Flash plugin.
By VOA
Aug 22, 2017


ISIS has lost about 78 percent of the territory it once held in Iraq, and its Iraqi capital of Mosul was liberated on July 10. Now, its false Syrian caliphate, Raqqa, is being liberated. Already, about 58 percent of the city has been cleared. Special Presidential Envoy for the Global Coalition to Counter ISIS Brett McGurk explained at a recent press conference:

“ About six months ago, ISIS was planning major attacks in Raqqa. They were planning major attacks against the United States, against our partners, and they were doing it in Raqqa using infrastructure of a major city. Today in Raqqa, ISIS is fighting for every last block, and trying to defend blocks that they are about to lose. They are fighting for their own survival. It is a fundamentally transformed situation.”

The campaign to seize Raqqa began on June 6, but it was made possible by an operation that came a few months before that.

“In Syria, when it comes to the campaign against ISIS, we are working primarily with the Syrian Democratic Forces. That's a force of now about 50,000—it's about half Arab, half Kurd. They also have never lost a battle,” said Special Envoy McGurk. In March, local commanders, seeing an opportunity to surprise the terrorists in Tabqa, dropped behind enemy lines with assistance from the Counter ISIS coalition, and seized the town, its dam and airfield. 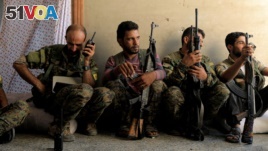 Members of the Syrian Democratic Forces keep guard at their advanced position during fighting with Islamic State militants in Raqqa, Syria. (Reuters)

“This was very important to close the noose on ISIS, because ISIS was using this area to get personnel and equipment in and out of Raqqa.” Said Special Envoy McGurk. “We saw a lot of [ISIS] fighters trying to flee and their defenses in Raqqa begin to degrade a little bit. So it was a really critical operation, and it was done because authority's been delegated down to seize opportunities like that. It was a really important moment in this overall campaign.”

“It's ongoing. This will take time,” said Special Envoy McGurk. “This will be a very difficult battle.”