A Barbaric Practice Must End

Update Required To play the media you will need to either update your browser to a recent version or update your Flash plugin.
By VOA
May 1, 2018


The barbaric practice of using civilians as human shields is a war crime, and, tragically, it is on the rise in the Middle East.

In an address to the Security Council, U.S. Permanent Representative to the UN Nikki Haley described how ISIS routinely took advantage of the presence of civilians in their homes, hospitals, schools and mosques – in order to protect its fighters from attack. When forced from their positions, ISIS terrorists rounded up families and compelled them to accompany them to new locations. 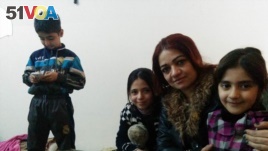 Ali's mother, Iman, and her four children were imprisoned as human shields by IS militants in Mosul, Iraq. (File)

But ISIS is not the only group that utilizes this vicious tactic:

“Hezbollah has also endangered civilians by positioning its fighters and weapons among them. Its terrorists use schools, hospitals and apartment buildings to shield its war arsenal in Lebanon. In the course of its massive arms buildup, Hezbollah has turned Lebanese villages into military compounds, stationing weapons depots, rocket launchers and command posts in, around, and under the civilian population.”

Ambassador Haley noted that the UN has reported that Houthi militants in Yemen have also used civilians as human shields. Hamas, too, she said, “has exploited and endangered the very Palestinian people it claims to represent by locating rocket launchers near schools, apartment buildings, hotels, churches, and UN facilities.”

There are threads of commonality that run through these examples, Ambassador Haley declared:

“The first is Iran. As usual, Iran is the patron and protector of many of these groups that fight from behind the bodies of innocent civilians...This is part of Iran's overarching efforts to destabilize the region – efforts that include illegal weapons shipments to Yemen, and invading Israeli air space with armed drones from Syrian territory.”

The second common thread is the dramatic risk to civilians:

“This is an issue that transcends the usual debates in this chamber,” Ambassador Haley said. “For humanity's sake, the Security Council must rise up to address this threat.”