It's been 34 years since the bombing of the U.S. Marine barracks in Beirut, Lebanon. At a ceremony honoring the 241 Americans who were killed during the mission to keep peace in that war-torn country, Vice President Mike Pence said that attack “was the opening salvo in a war that we have waged ever since – the global war on terror.”

“It's a conflict that has taken American troops across the wider world –from Lebanon to Libya, from Nigeria to Afghanistan, from Somalia to Iraq, and many other battlefields in between.”

Vice President Pence called radical Islamic terrorism “a hydra with many heads,” which the Trump administration is committed to defeat. 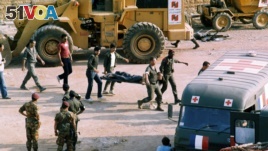 FILE - The scene at the U.S. Marine base near Beirut airport, Lebanon, following a suicide truck blast that destroyed the base and caused a huge death toll, Oct. 23, 1983.

Hezbollah is the terrorist organization which planned and perpetrated the Beirut attack. Under President Donald Trump, Mr. Pence said, the United States has redoubled efforts to cripple Hezbollah's terrorist network and bring its leaders to justice:

”Our administration announced rewards for information leading to the location, arrest, and conviction of two of Hezbollah's senior-most leaders, including Fuad Shukr, one of the masterminds behind the bombing of the Marine Corps barracks.”

But Hezbollah “is merely a proxy for the leading state sponsor of terrorism,” said Vice President Pence. “And President Donald Trump has put Iran on notice that we will no longer tolerate...their support of terrorism.”

“As the President often says, he has no higher priority than the safety and security of the American people, and we will fight tirelessly to defeat the specter of radical Islamic terror no matter where it rears its ugly head.”

That also means in Afghanistan, U.S. forces will remain engaged in the fight against the Taliban and all terrorist groups, until the menace to our homeland is eliminated; and beyond the hard won victories in Iraq and Syria, the U.S. will continue to hunt down and destroy ISIS at its source, “so it can no longer threaten our people, our allies and our way of life.”

“The war on terror began 34 years ago,” said Vice President Pence. And brave Americans, continue the fight. “We honor their service and sacrifice ...renew[ing] our pledge that...the sacrifice we remember today will not have been in vain. And as a nation, we resolve that under the leadership of President Donald Trump, we will drive the cancer of terrorism from the face of the Earth.”