Update Required To play the media you will need to either update your browser to a recent version or update your Flash plugin.
By Daniel Schearf
Dec 26, 2016


Throughout the former Soviet Union, Belarus was famous for making tractors at the state-run Minsk Tractor Works, which this year celebrated its 70th anniversary.

The Minsk Tractor Works was established in 1946 and, with state help, survived the collapse of the USSR. “It is one of the largest manufacturers of the few left in the post-Soviet territory, as far as its capacity is concerned,” says Deputy Director General Andrei Suslenkov. “So one could be straightforward in saying that its contribution [to the economy] is huge.”

Critics say the state-run model is failing as Belarus struggles with inflation, and a shrinking economy.

“In 2016, it has failed to deliver on reforms, so it believes that somehow it will overcome difficulties,” says Jaroslav Romanchuk, a political economist at the Scientific Research Miss Center . “But as we see from numbers, from the way manufacturers work, the situation, the job market, things are getting worse.”

The workforce at the Minsk Tractor Works shrank from the original 30,000 during Soviet times, but it remains a major employer in Belarus.

“There are 18,000 people currently working at Minsk Tractor Works,” says Aminya Baitasova, curator of the factory's newly-opened museum. “Should the factory have been closed, can you imagine how many people would have remained unemployed? How could anyone deal with this amount of people? The people would begin worrying. There might be some rallies, or war.”

But Belarusians also is battling its way into the global market of high technology and innovation with software like the World of Tanks franchise.

“A High-Tech Park provides extra possibilities for the development of IT companies here, on the territory of the Belarus Republic, like tax advantages, as well as many advantages for employees engaged in this field and a favorable climate for business development,” says Anastasiya Zaytseva, PR Manager for Wargaming.Net's Game Stream. 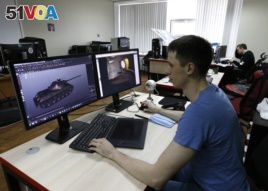 The online gaming company got its start in Minsk, but has attracted fans around the world with more than 110 million subscribers.

While employing 2,000 young staffs and programmers in Belarus, they look to the future, while acknowledging the Soviet past that inspired their virtual tanks.