Benghazi Killings to be Investigated

Update Required To play the media you will need to either update your browser to a recent version or update your Flash plugin.
By VOA
Aug 23, 2017


The governments of France, the United Kingdom, and the United States welcome the recent announcement by the Libya National Army, or LNA, that it will investigate reports of unlawful killings in Benghazi. The LNA has recognized the arrest warrant by the International Criminal Court prosecutor for a member of the LNA, Major Mahmoud Mustafa Busayf al-Werfalli and has suspended him pending an investigation. The United States calls on the LNA to ensure that the investigation is carried out fully and fairly; and those responsible for the unlawful killings are held to account.

Al-Werfalli, a senior Libyan military commander, stands accused by the International Criminal Tribunal judges of personally shooting or ordering the execution of 33 people who were either civilians or injured fighters in at least seven incidents in 2016 and 2017. 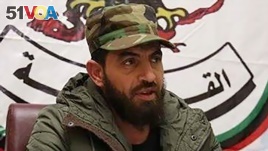 Major al-Werfalli is loyal to strongman Khalifa Haftar, a former general under long-time dictator Muammar Ghaddafi. Haftar heads the most powerful military in Libya and his forces recently managed to retake Benghazi after a three-year campaign against other militant groups.

The U.S. is monitoring ongoing acts of conflict in Libya closely. Those suspected of committing, ordering, or failing to prevent unlawful killings and torture on all sides must be fully investigated and held accountable. The U.S. and its allies will continue efforts at the international level to pursue appropriate action against those who are complicit in violations of international human rights law or international humanitarian law, whatever their affiliation. It is in Libya's interest to be able to rely on unified security forces responsible for the country's security and acting within the framework of Libya's laws and respecting international law.

The governments of France, the United Kingdom, and the United States also reaffirm their support for the Government of National Accord. We underscore the importance of the United Nations' central role in facilitating Libyan-led political dialogue, welcome the appointment of the new Special Representative of the Secretary-General Ghassan Salamé, and look forward to supporting his efforts to facilitate a political solution in Libya.