Update Required To play the media you will need to either update your browser to a recent version or update your Flash plugin.
2016-2-5

The United States condemns the Boko Haram terrorist attacks on January 29-30 in northeast Nigeria. On January 30, in the village of Dalori, the terrorists bombed a market, attacked a village, and fire-bombed huts. Boko Haram militants set fire to as many as 300 homes in the village, burning alive some people who were inside, including children. According to Nigeria’s National Emergency Management Agency, at least 65 people were killed and 136 injured. 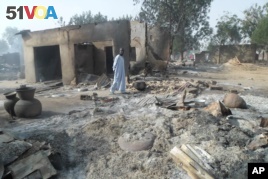 A man walks past burnt out houses following an attack by Boko Haram in Dalori village 5 kilometers (3 miles) from Maiduguri, Nigeria, Jan. 31, 2016.

Boko Haram, which in March 2015 pledged its allegiance to the Islamic State, has been attacking northern Nigeria for years. According to press reports, Boko Haram’s insurgency has killed 20,000 people in the last six years and driven at least 2.3 million from their homes. Boko Haram continues to commit vicious attacks against the innocent, including children. This terrorist organization repeatedly has shown no regard for human life.

We extend our deepest condolences to the families of the latest victims of Boko Haram.

The United States will continue to support those affected by Boko Haram’s violence through ongoing humanitarian aid and support services.

In response to the threat posed by Boko Haram, President Barack Obama announced in October 2015 that the United States would send 300 U.S. troops, along with surveillance drones, to Cameroon to bolster a West African effort to counter the militant Islamist group. U.S. troops were tasked with conducting airborne intelligence, surveillance and reconnaissance operations in the region.

In a statement issued on February 2, State Department Spokesperson John Kirby said the United States “remain[s] committed to supporting Nigeria and its Lake Chad Basin partners in the fight against terrorism.”