Update Required To play the media you will need to either update your browser to a recent version or update your Flash plugin.
Luis Ramirez
October 11,2015


LONDON— Turkey has begun a three-day period of mourning following Saturday’s bomb attacks in the capital, Ankara, that killed nearly 100 people. With contentious parliamentary elections three weeks away, the attacks highlight the challenges Turkey is facing as it struggles with ethnic friction, an ongoing migrant crisis, and growing tensions with Russia.

To avoid fueling even more tension, Turkey’s government imposed a media blackout banning these images of the moment the two bombs exploded at a rally in which Kurds and progressives for called for equality and peace.

By the pre-dawn hours Sunday, after the dead and injured had been carried away, the investigation continued into who carried out the massacre and why. 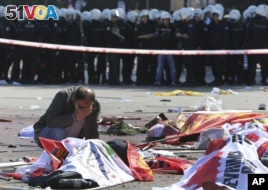 “Those who try to mute people’s will have launched a war and what happened in Ankara was another front line," said Levent Altun, a prostester in Istanbul. "People were saying no to war and persisting in their calls for peace and they tried to silence them with bombs. So we are here, shouting them back, telling them people will not be deterred by their bombs.”

Across Europe, leaders condemned the attacks, and NATO is pledging to stand united in the fight against terrorism. The growing instability in Turkey is another headache for the alliance.

Turkey is a NATO member, and last week the alliance pledged to support the country in the face of incursions by Russian warplanes into its air space.

"We are in constant dialogue and assessing the situation with Turkey, but the main thing is we have the ability to reinforce, they have a strong army and we have a rock solid commitment to protect and defend them," said NATO Secretary-General Jens Stoltenberg.

''We should unite our efforts in a struggle against this evil. I want to express my deep condolences to Turkish people, the Turkish president. What happened in Turkey is an impudent act of terrorism,” he said.

But any involvement by Russia in Turkey could further complicate matters for the NATO and the West, which depend on Turkey’s strategic position in the Middle East for everything from the use of its air bases to its hosting of millions of refugees — most of them from the conflicts in neighboring Syria and Iraq.

No one has claimed responsibility for the bombings in Ankara, but they are a sign of the turbulence the country is facing at a crucial time in the region.