Update Required To play the media you will need to either update your browser to a recent version or update your Flash plugin.
By VOA
Jun 27, 2017


To address the economic, security, and governance issues facing the countries of the Northern Triangle, the United States and Mexico co-hosted in mid-June a high-level Conference on Prosperity and Security in Central America.

“[The Trump] administration's top security priority in the Western Hemisphere is stopping transnational criminal organizations from harming American communities through the drug trade and its attendant violence,” said Secretary of State Rex Tillerson. 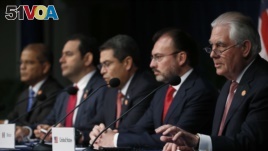 Secretary of State Rex Tillerson speaks during the Conference on Prosperity and Security in Central America, June 15, 2017.

“Promoting prosperity in Central America is a key component of this effort, as our prosperity and security interests are tightly linked through the movement of ideas, people, and goods,” he said:

“What happens in the Northern Triangle countries of El Salvador, Honduras, and Guatemala directly affects the security and economic interests of the United States and other countries in the region. A more prosperous, safer Central America will do much to halt illegal and dangerous migration, defeat transnational drug cartels and gangs, and end corruption in their economies.”

“In order to boost economic prosperity, it is imperative that we work together to strengthen the formal economy and diminish the economic drivers of illegal migration and other illicit activities,” said Secretary of State Tillerson.

For that reason, the United States pledged to support regional governments in combatting organized crime, enhancing citizen security, improving the secure flow of goods and people, increasing transparency, and promoting regional security cooperation. The United States will also continue its support for the Alliance for Prosperity and its efforts to address the economic, security, and governance challenges in the region.

Since the launch of the Alliance for Prosperity nearly three years ago, the United States has allocated 1.3 billion dollars to Central America. Indeed, the United States is committed to continue to improve the delivery of U.S. foreign assistance to the region.

“A secure and prosperous Central America contributes to a safer, more prosperous United States and Western Hemisphere,” said Secretary of State Tillerson.“The United States recognizes the region as an important area in our foreign policy agenda, and we welcome this opportunity today to work together to create the prosperity we all want and start solving the problems that are obstacles.”